It doesn’t bother my boyfriend, but I’m incredibly embarrassed by it 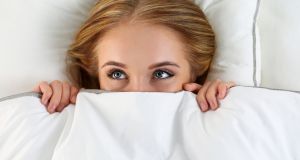 If he’s performing oral sex and you can feel that you’re about to pass gas, just grab him up and kiss him. Photograph: iStock

Is it normal for a woman to fart when she orgasms? I’ve had this problem multiple times, and I’ve noticed it’s more common if the orgasm is intense. It doesn’t bother my boyfriend, but I’m incredibly embarrassed by it. Is there anything I can do to prevent it?

Is it normal to fart during sex? My darling girl, it’s an act celebrated by James Joyce in language so sexual I can’t even print the entire quote; suffice to say that our most revered writer wrote in a letter to his beloved Nora Barnacle that during sex he deeply appreciated experiencing her “big fat fellows, long windy ones, quick little merry cracks”.

He continues, quite romantically I think, to claim that “I think I would know Nora’s fart anywhere”. If you and your boyfriend ever consider marriage, I think you’ve got a new contender for your vows.

Yes, occasionally farting during sex is normal. You’re human and have a human body. And the human body is unpredictable, and unintentionally hilarious, and desperately inconvenient – and it’s also glorious, and pleasurable, and real. These are inseparable. Yet women in particular are held to absurd and objectifying ideals that eliminate the realities of our bodies, instead requiring us to constantly adhere to fantasies of feminine perfection. This is nonsense, and I’m glad your boyfriend knows this – you may just need to know it, too.

If you are still worried, however, know that there are three major reasons that you may be passing gas during sex.

One is just digestion, which could be helped by some diet changes, or simple scheduling. The traditional date of eating a dinner of gassy vegetables and snooze-inducing carbs before sex is deeply flawed, physically. Have sex first so you’re full of energy and are left with an appetite!

Another possibility is that it’s not a fart at all, and that some air has been pushed into your vaginal canal, which then comes back out, noisily. This can be mitigated by less vigorous penetration, but it’s completely normal.

This is love, and bodies, and sex: they’re messy, and clumsy, and awkward

You can do pelvic exercises to strengthen the external sphincter muscles and learn to try to contract them during the orgasm. However, thinking about contracting during orgasm can be distracting and inhibiting and could interfere with your pleasure, so frankly I think it’s better to just try not to worry about it.

If he’s performing oral sex and you can feel that you’re about to pass gas, just grab him up and kiss him. If he’s determined to stay down there, a quick “Come up for a second babe, I need to fart and don’t want to do it in your face” gives him a warning, and really shouldn’t cause anything but a giggle, a kiss, and a return to what you were doing.

This is love, and bodies, and sex: they’re messy, and clumsy, and awkward, and not what they look like in the movies. What you have is better, because it’s real. Learn to laugh about it and enjoy.