Blind triathlons: an exhilarating test of teamwork for athletes and their guides

For blind athlete Donnacha McCarthy, these events are about building bonds and working together 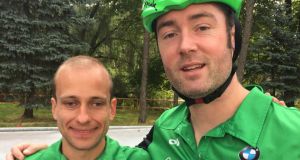 Donnacha McCarthy with his triathlon guide Stephan Teeling Lynch. The pair recently competed in a triathlon in Estonia

Taking part in a triathlon is no easy feat but imagine trying to swim, cycle and run competitively without being able to see – it doesn’t seem possible.

But many powerful athletes are visually impaired or even blind and rely on a tethered guide to help them train and compete safely.

Donnacha McCarthy, who is originally from Cork but lives in Dublin, has no sight whatsoever but doesn’t let that stop him as he trains daily and competes on an international level.

And if that isn’t impressive enough, having only learned to swim last year, the 28-year-old is now regularly taking part in triathlons both in Ireland and abroad.

“Swimming is the most daunting for me, I have to admit,” he says. “I am tethered leg-to-leg with my guide and this helps me to stay in a straight line but it is difficult as I am totally blind so have no light perception at all and I can get nervous. For the cycling part, my guide and I are in tandem and when we run, we are tethered hand-to-hand so we have to ensure we have a similar rhythm.

“Normally I would try to get as much training in as possible with my guide in order to develop a routine and a rapport but this isn’t always possible as we can be in different parts of the country or my regular guide may not be available.”

This is how Stephan Teeling Lynch became Donnacha’s guide for a recent triathlon in Estonia. The seasoned athlete, who runs gotri.ie in Shannon, Co Clare, found himself agreeing to take on the role and says the experience, which he undertook after a period of personal tragedy, was overwhelmingly positive and has led him to offer his services again.

“I had been struggling a bit with all that has gone on in life over the last four years – losing my father to leukaemia, my mate to suicide, my dogs to an accident and my sister to sudden death,” says the Clare man. “I didn’t realise it but I was juggling too many balls and trying to raise a young family [Freya and Finn] and my business – so I wasn’t in a great place. In hindsight I can say that my wife, Jen, was holding it together for us.

“But then the phone rang and Eamonn Tilley, Triathlon Ireland’s Para Tri director, rang me out of the blue as his brother was unable to guide at the European championships in Tartu, Estonia, and asked if I would do it. I didn’t ask too many questions but if your country calls, you go – and figure out the rest later.”

The father of two says the idea behind guiding an athlete is simple but in practice it can be quite difficult.

“You are basically tied together – but it is called tethering,” he says. “There are rules to its length and elasticity and during the swim you place it either on the leg or the waist. The danger point will be the exits and runs to transitions. During the bike we ride a tandem and during the run we use a tether again.

“But it’s not always easy. Guides and athletes might not be based close to each other so training time might be limited together. Luckily I managed a lot of training days [thanks to Eamonn and his coaches] and this is a very important way to build a relationship with your partner.”

As a recent recruit to the guiding circuit, the triathlete is still learning the ropes but says it is an exhilarating and rewarding activity which he hopes to experience more of in the future.

“I’m new to the team, so in some cases, I’m only meeting my partners for the first time at races and this is exciting but can be hard too,” he admits. “So far, I’ve raced with four hugely talented athletes and each one – Donnacha, Stephen, David and Nicholas – all have individual strengths and weaknesses.

“So like myself, it’s important to put our strengths together to minimise our weaknesses. The journey for the next year or two will be highly motivating and getting to race in the green, white and gold again at an elite para tri level is exciting. And it’s important to note that these athletes are world class or at least training to be world class. So this isn’t a ‘feel good’ exercise for guides like me. And personally the Paralympics are a huge motivation – a once-in-(an ageing athlete’s)-lifetime opportunity.”

Stephan says the only thing he worries about is letting the other athletes down as, naturally, taking home a medal is the pinnacle of success.

“All these athletes sacrifice a lot to do what they do,” he says. “If we have a bad day we only have ourselves to blame, but when you’re racing for someone else and their goals, it adds a bit of pressure. However, it also motivates more if that makes sense. I’m not the biggest fan of gravity so hilly courses on the runs put the fear of god into me but that has forced me to put down the fork [cut down on calories].

“The best aspect of guiding is the winning; I’m not going to lie. It’s great to take part but these guys have big goals and big aspirations. They might have had to pay €3,000 or more to get to a race – so getting a medal is really important.

“I’ve not had that joy yet but other members of the team scored third place in Canada earlier in the year. Guides want to win and athletes want to win, that’s why we race and that’s what we aspire to.”

Indeed Donnacha is currently preparing for his next event and trains six days a week.

“I’m constantly training,” says the athlete who works for Vodafone. “It can be difficult to balance everything in life but we all have to make sacrifices and I’m really enjoying the challenge.

“For most athletes, a triathlon is a solo sport, whereas me and my guides are a team and that is what makes it so satisfying – we build a rapport and work together for an end goal.”

Stephan agrees and says there are so many people involved which help to make the sport a team effort: “It’s not often in life you get to race for your country, as part of team trying to achieve a huge goal – it’s not about me anymore and I love that,” he says. “Sometimes we wallow in our own self-misery but these guys just get on with it. They feel an obstacle, assess it, attack it and move on. Life has challenged them and they have shouted louder than howling winds to spread their wings and aim higher – we are just the lucky ones trying to keep up.

“There are so many people who have been really supportive and there are a lot of people helping out – I couldn’t name them all but without them nothing would function. I’ve been around this sport a long time and I’m grateful for their trust in me to come in do a job for the team.”

Could running be good for your knees?