Patients and pets: there’s more than one way to skin a cat 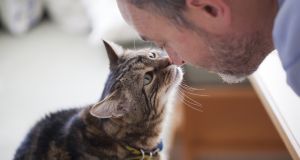 An elderly patient is admitted to hospital after a fall at home. He is stunned after the fall but, thankfully, uninjured. It takes him a few days to recover, but, as soon as he able, he wants to go home.

The physiotherapist wants to work with him, the social worker wants to examine his support system, but all he wants to do is go home.

We feel he is not yet safe. He acknowledges that a worse event could happen, but, still, he wants to go home.

Theories are posited as to why. Maybe the concussion is worse than we first thought. Maybe he is cognitively impaired and unable to make decisions about his safety, in which case a state-appointed guardian may be needed. Maybe he doesn’t like the other patients, in which case he could be placated by moving him to another room. It is the beginning of a month of medical rounds for me and he is the handover without a plan. He is sitting out of bed, dressed and sipping his tea. He looks up at a new face with interest. “I am the specialist taking over your care,” I say. “Look, love, please just let me go home. I’m begging you.”

Something about his desperation moves me and I am struck by the imbalance of power between me and my patient twice my age. “I really want to, but help me understand why you’re so eager.”

I expect to hear about the incessant noise in the hospital, the bad food or the lack of clear communication but instead, to my complete surprise, tears start rolling down his face. “It’s my cat. I want to see my cat.”

The cat is a link to the years he shared with his late wife.

Now, it snoozes in his wife’s chair and responds to his reminiscences, as if to say it knows he is hurting. In the twilight of his life, when his children are too busy to visit and the residents in his retirement village keep falling sick, his cat is the constant in his life.

Outside, his story touches a nerve. People band together, set up community services and get him home quickly.

In the end, he turns out to be a simple discharge. Reuniting an old man with his cat turns out to be the best medicine, which leaves me wondering how often doctors are cognisant of the silent distress of patients who are separated from their pets. Not often, I suspect.

The very next week, the distress of another patient announces itself loudly and heartbreakingly. She is 50, her dog was 18. She was divorced and lonely. He was old and slow. When her work turned her out and her friends moved on, the dog proved her anchor. Amidst all the shifting circumstances of her life, he never stopped loving her and greeting her with delight every morning. He needed nothing more than a walk and a few biscuits to send him into raptures of delight. Suddenly, he fell very ill and the vet suggested the kindest thing to do was to let him go. So she did.

Then she came home and took an overdose.

How could she face life without her dog? The postman spotted her through the window and called an ambulance. She was successfully resuscitated and now she is on the medical ward, awaiting psychiatric intervention. When I meet her she is pleasant and remorseful, particularly for being a burden on the overstretched mental-healthcare system.

A psych consult won’t help her, she pleads, another dog will. In fact, she has found just the right one and even thought of a name. She just hopes it won’t be gone before she is cleared. I tell her that all my sympathies still won’t add up to a hasty discharge because she really does need to see the psychiatrist. She begins to sob.

I have an insightful resident with me. “Tell me about your dog,” she asks brightly. “I love dogs.”

The patient pulls out a photo from under her pillow.

“He is so happy,” I remark as I start jotting some notes.

“He was all I had. I went months without talking to people.”

Her loneliness will need attention but that’s a topic for another day, easy to identify but difficult to fix.

“What was his favourite thing to do?” the resident smiles, leaning forward.

“He loved to walk, even as an old thing.”

We go back and forth, the standard questions about headache, pain and immobility replaced by an interest in a departed dog that was the life of his owner. It feels intuitively right but somehow misplaced, as if we are breaking some established protocol that says we should be asking about the number of pills she took and whether there was alcohol involved and what she would do if her new dog got sick.

We should be checking her vitals, ensuring her bloods are fine, that the drug screen is clear. And watching our every word in case something inopportune brings her grief crashing back and we are to blame.

Except, in that moment, it is clear that while the medical questions have merit, the most important thing for this patient at this time is to cast them all aside and create a common understanding to make her feel less lonely in her experience. I count 10 minutes spent at her bedside. In those 10 minutes, we watch her mood lift and fresh hope enter her tone. There are people who love dogs, she thinks. There are people who understand my grief. Why, they are even interested in my old dog.

Our time is limited, and we must move on apologetically. With dry eyes and genuine gratitude, she says, “Thank you for asking about my dog. It’s the nicest thing anyone has done.”

Really? Could it be this simple?

Amidst the trappings of modern medicine, it’s hard to believe that the inexpensive 10 minutes spent at her bedside might have proved to be the most useful and cathartic treatment of all.

All her tests turned out fine. A day later, she is deemed safe for discharge and is overjoyed at the reprieve.

The next time we meet an upset patient, I suspect we will be tempted to ask the same question as always, “What’s the problem?”

But with a better history and a little luck, these experiences will shape a more nuanced approach to the suffering of patients.

For many of them, the best question may be a request.

“Tell me about your pet.” – Guardian