The €2.6m surgical robot in Limerick that’s not allowed to fully operate 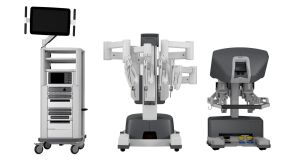 Medical students and trainees surgeons are denied vital training in robotic surgery, which impoverishes the area and the long-term viability of the urology service.

University Hospital Limerick is lucky enough to have the only dual-console da Vinci Xi surgical robot in Ireland, but unlucky enough to be forbidden to use it for radical prostatectomies.

The robot is an operating machine, and has the appearance of something you would see in a gaming arcade. A surgeon sits into it, looks at the patient though a 3D screen and controls the robotic arms (they are like smaller versions of Dr Octopus’s tentacles in Spiderman) as the operation is performed. It is beautifully suited to the radical prostatectomy, being less invasive, with quicker recovery times and fewer complications than the more old-fashioned method.

It is the only one of its kind in Ireland as the robot has a dual-console teaching facility, which is ideal for training .This robot would make a post in the hospital very desirable for not only for young consultant urologists but also for bright young specialist registrars.

Instead, the patients are sent to Galway, where they are likely to undergo a robotic operation in a private hospital such as Galway Clinic. The HSE say this is the national policy. However, if the patient develops complications after the operation, such as infection or sepsis, they have to go back to UHL to be admitted and treated. So UHL is deemed competent to look after the patients only when things get complicated.

The policy began with the National Cancer Strategy, which was launched as long ago as 2006. It was felt that cancer treatment should be centralised, which was fair enough, but there has been considerable evolution of the health service structure and surgical treatment since the boundaries were drawn.

One game-changing initiative occurred in 2016, when the JP McManus Benevolent Fund donated the dual-console da Vinci surgical robot, which cost €2.6 million. As it provides minimally invasive keyhole surgery, enabling largely improved recovery periods in comparison to regular operations, it is estimated the machine can provide annual financial savings of €110,000 in equipment use alone. It is also estimated there is an average cost-saving of four bed days per patient. UL Hospitals Group confirmed that one bed-day costs €1,456. So the outmoded policy which forbids the optimum use of the robot is wasteful of money as well as equipment. This is happening in a health service that is desperate for money and resources.

It seems unfair for the patients in the mid-west catchment area to have to go to Galway, Dublin or Cork for one of the most common urological cancer operations. The effect of the NCCP policy has been not to centralise but to diversify the prostatectomy service into private hospitals. This model raises questions about governance, research and audit in a subcontracted service.

The hospital in Limerick is associated with the GEMS medical school which educates hundreds of Irish and international students. Medical students and trainees surgeons are denied vital training in robotic surgery, which impoverishes the area and the long-term viability of the urology service. Bright young surgeons will find plenty of other countries where they will get the training they need.

‘Moving overseas is daunting, but he took it in his stride’: An Irish woman walks for her dad
5

How to cook Christmas: Turkey and ham made easy
8