Born with her heart on the outside, Vanellope gets to go home

A British baby who was born with her heart outside her body, and given a 10 per cent chance of survival, has been allowed to make visits to her parents' home after months in hospital. Video: BBC/Reuters 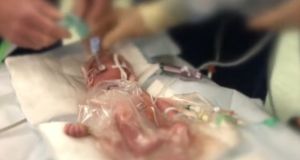 After nine months in hospital, a baby girl – born with her heart outside her chest – has been able to go home, albeit for a short visit.

Born prematurely and initially given just a 10 per cent chance of surviving, Vanellope Wilkins was diagnosed with ectopia cordis, meaning her heart was outside her chest and she lacked a breast bone.

She immediately underwent surgery at Leicester Royal Infirmary – and several more since have all been designed to get her little heart back inside her tiny body. “It is quite difficult,” congenital heart surgeon Branko Mimic said about the rare condition. “There is no huge experience.”

Vanellope has trouble breathing and is hooked to an oxygen machine. She also wears a custom-made jacket that acts as an exoskeleton, giving support to her ribs and internal organs.

Naomi Findlay (31), from near Nottingham, was nine weeks pregnant when doctors determined her daughter’s heart was in the wrong place. She was, apparently, advised to have an abortion, but the parents refused. She is named after the female character in Wreck-It Ralph.

“That’s what keeps me going,” said her mother. “Knowing that she’s fought all the way to be here. It has been a roller coaster ride, but it’s our time now. We can finally be a family again.”