‘Masters football...is kind of holding things together for me. The GAA is a way of releasing my frustration ’ 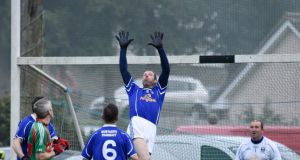 The 2016 All-Ireland Masters final between Mayo and Cavan

Just as the dust settles on Dublin’s win over Tyrone in the All-Ireland senior football final, the two counties are preparing to meet again in another All-Ireland football decider. This time it’s a chance for the (slightly) older generation to play for the spoils.

“Initially the GAA ran the Masters through the 1990s, but then, for whatever reason, they discontinued it – it fell out if favour,” says Masters PRO Con O’Meara.

After several attempts to convince the GAA to restart the competition, it was eventually decided to go it alone. The Gaelic Masters Association (GMA) was set up in 2010.

“They ran the competition with only five counties, but that has built year on year, and now we have 16, and there’s new counties coming along all the time. For example, Dublin, Down and Clare would have all joined in this year. There’s counties looking to get in next year – Laois, Meath and Fermanagh. There’s a big demand for guys over 40 to have an outlet to play football.”

This year saw 16 counties partake in the group stages, including a team from London, with each county playing six matches. The top four sides qualified for the Masters’ All-Ireland semi-finals; with teams in 5th-8th contesting the Shield semi-finals, and those 9th-12th in the semi-finals of the Plate competition.

The Shield final will be held this Saturday (September 15th) between Mayo and Roscommon in Fr Manning Gael’s pitch in Drumlish, Co Longford, followed by the main event, the 2018 All-Ireland Masters football final, where once again a Dublin team will meet a Tyrone side.

Not for the first time players such as Ray Cosgrove and Shane Ryan will line-up for Dublin against Tyrone men that include Eoin Gormley and Mark Donnelly in their ranks.

“The fun of just being in a dressingroom and playing competitive game and kicking a point or running around and hitting people, there’s no better way to feel good about yourself than to exercise.

“Your family want you to be happy as well, and when your kids get to a certain age and they start coming along that’s the dream, because the kids come along and have a bit of fun and watch the match.”

For some the chance to play the sport again is very important. Such is the intensity of the game at a young age that if you are good enough to play for your county then you’re thrust into the limelight and put up on a pedestal. Coming down from that pedestal can be very harsh.

“I can remember going to training on the Thursday night, coming home and never going back,” says one of the players from an Ulster team. “And the phone never rang. No ‘where are you? Why have you not come back?’ it just didn’t ring again, and I stepped away for a lot of years.”

Unfortunately the former elite footballer suffers with mental health issues, but the Masters has saved him on a few occasions.

“Masters has really given me the spur to keep myself fit over the winter months and gives me something to look forward to. It’s something I am still fighting with to this day, I tried suicide twice this year. I was sectioned in April, and if I hadn’t have gotten out of hospital to play a game I was going to sign myself out anyway. Football means that much to me.

“You get yourself into a bubble and its old friends, life just seems to melt away into nothing and you’re concentrating on playing your game. Masters football to me is the best at this stage of my life. It’s kind of holding things together for me. The GAA is a way of releasing my frustration and realising my anxieties.”

Ronan Keane has been playing on the Sligo panel for three years now, and he feels that it fills a void in his life that was left behind after playing at such a high level in the past.

“When you’re playing at a very high level, when that gets taken away from you the biggest problem for me was the void that was created in my life. When that ended I felt I was still in my prime and it hit me very badly, not initially but over time the void was there, and it eventually got me down for a good few years.

Everybody says that nothing beats playing. By getting back involved in the Masters, because it’s over 40s, it gave me the opportunity to get back in the dressing room again, it was to get back playing with those people that I would have played with back 20 years ago.”

Clare joined the competition for the first time this year after chairman Conor Killeen teased a team out of the county with a write-up in the local paper.

“We wanted this to be a more relaxed approach to playing sport at this stage; that the pressure wouldn’t necessarily be there as maybe when you’re in your 20s with your club or with your county; 100 per cent commitment is required at that level – with families involved it a different scenario.

“We always went for food afterwards and maybe a few drinks. Even with the visiting team there were great contacts and friendships made over the past year, which I think will go on into the future.

“These guys are proving that if it’s in you, it’s in you. Even if, sadly, the board that you sold your soul to in your younger days doesn’t recognise that. Hopefully that is something that will change in the future, with new initiatives coming along to create outlets for those no longer desired by the panel or able to keep up with those young fresh legs in Junior B!”

HOW THE MASTERS OF GAELIC FOOTBALL GO TO WAR

Starting back in May, the 16 counties that competed for the 2018 Masters championship were Dublin, Cavan, Westmeath, Galway, Monaghan, London, Kildare, Mayo, Sligo, Down, Clare, Tyrone, Donegal, Roscommon, Leitrim/Longford and Antrim. Each county got six games, the top four progressing to the semi-finals, the next four into the Shield semi-finals, and the next four into the plate final. It makes for meaningful games throughout the summer, and avoids any “dead rubbers”.

Open to all players over the age of 40 (this year, for instance, anyone born in 1978 or before), the game is played under regular GAA rules with select modifications, including unlimited substitutions.

Mayo won the back-to-back titles in 2016-17, boasting former county stars such as Aidan Higgins and Kenneth Mortimer, while Tyrone, captained by former county player Damian Gormley, won the 2015 final over Galway, who had the likes of former All Star Declan Meehan in their ranks.

Dublin, Clare and Down rejoined the competition this summer and straightaway Dublin have made their presence felt, going unbeaten, with former county stars Ray Cosgrove, Shane Ryan and Peadar Andrews in their ranks. They needed a replay to get past Donegal in the semi-final, by a point, to set up the final with Tyrone.

Managed by Eugene Bradley, Tyrone’s standout players in their semi-final win over Sligo were midfielder Eoin Gormley, plus Damian McCrory, Damian Patton, and substitute Mark Donnelly, all looking extremely fit and like a well-drilled team.