Working on your relationship while working out 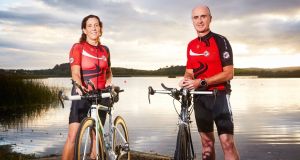 They say that opposites attract but, more often than not, the things we have in common with our partner can be the glue that keeps relationships together.

A shared love of food, wine, travel, literature or comedy can keep the fires burning as couples enjoy their down time together. And now, in an age when more and more people are becoming conscious about their health and fitness, working out and training together can be a great way of not only spending time with your partner but also motivating each other – as a little gentle competition can be a great way of pushing through the pain barrier.

Alison and Mick Rooney from Clare (both 51) have just completed the ultimate fitness challenge together when, in August of this year, they travelled to Estonia to take part in an Iron Man competition.

“I was never into fitness until I was asked to partake in a sprint triathlon in 2006 as a fundraiser for the Down Syndrome Special Olympics,” says the mother of four. “Since then I continued to do triathlons at various distances and, after doing my first marathon in 2015 as a one-off-bucket-list-tick, I have done one every year since.

Officially we don’t compete with each other, but if we’re honest, there is some competition

“I don’t consider myself to be a serious athlete as I won’t be winning a triathlon any time soon and there isn’t a hope that I could beat Mick in any of the disciplines, but I’ll keep trying. Officially we don’t compete with each other, but if we’re honest, there is some competition. There was a time when I could match him in swimming – he has now surpassed me – and although I hold the marathon record in the house, it’s only a matter of time before he claims that one too.”

Husband Mick says while they are not too competitive with each other, they do compare results.

“We do compete in some respects, for instance, in terms of pool swimming, our times are quite close for many short-distance events, therefore, in competitions we generally end up in the same event/ heats, often swimming in adjacent lanes so we definitely race each other,” he says. “In triathlons we don’t compete so much, although we do compare our results on how we performed with respect to our peers or who is first out of the water in the swim.”

Counsellor Damien McCaul says competitiveness is often considered to be an intrinsic part of our primordial survival instinct and it also functions as a way to self-evaluate. But, as do the Rooneys, it is important to recognise each other’s strengths.

“Having a competitive edge within a relationship can challenge each individual to further develop their abilities and help them to be the best version of themselves at any given moment, be it physically, intellectually, emotionally or otherwise,” says the relationship expert.

“As long as this is done in a supportive and understanding way, it can enhance the relationship and keep the bond intact.

“However, focusing solely on what one can gain over a partner could potentially cause tension, as this serves only the needs of the individual. It would be more positive if differing abilities were a source of inspiration while having a common goal. And while training together could potentially create frustration if one partner seems to be having more success or is simply moving at a different pace, the role of the more able partner ought to be one of encouragement, helping to motivate the other.”

Alison, who works as an accountant , says combining both shared and solo training is the key to success.

“I registered both of us for the race [Iron Man] last August but the specific training for it didn’t need to start until January or February,” she says. “We were already training for Dublin City Marathon at that stage so that formed most of our schedule up to November. A few weeks after the marathon I started to train a little more on my cycling as it is my weakest discipline. I also did a tri-club turbo session on Monday nights while Mick took our daughter, Sinéad, to a maths grind – he would often run while waiting for her.

“Up to January, there wasn’t much of a plan but then we tried to settle into a routine for a 10-week base period, training for six to 10 hours a week over six days. In mid-March the training hours increased and during the final 10 weeks we were training up to 15 hours a week.

“Generally Mick took Mondays as his rest day while I did the tri-club turbo session, Tuesday was my rest day while Mick did a cycle. For the rest of the week, we combined morning swims and evening runs, generally starting [the runs] together but Mick would pull away at his pace and I’d go at mine.”

The couple trained for seven days a week either with various groups, together or alone and Mick, who works in aircraft leasing, says having a shared goal is definitely motivational.

“It’s certainly not easy to go and train sometimes when you don’t feel like it, you’re tired or unmotivated, yet you know you have a specific session to do, so when one of us goes, the other feels guilty into doing the session,” he says. “In the dark winter mornings, when hibernation seems the natural thing to do, it’s hard not to get up [for an early morning swim] once one person gets their feet on the floor. Usually Alison is the most diligent with respect to early morning swims – she’s always on time and never misses the warm-up. But we travel separately as I work in Shannon [where the pool is located] so this allows me to be a little tardier.

“Also from a logistical perspective, it’s a hell of a lot easier, and a little bit of healthy competition is no harm. But it needs to be at a level where it’s enjoyable so, from a social perspective, it is important to join clubs and train with other people to heighten the experience.”

Alison agrees: “I would advise other couples who are thinking of training together to try to find a group so you can train with other like-minded people,” she says.

“We definitely couldn’t be training together all the time. I think we would kill each other. But it’s important to encourage each other and to try to find ways to ease the burden at home. In our case we often made a dinner that would cover a few days so we didn’t have the added hassle of cooking when we came home from training.”

Accepting and working with differences including physical abilities is part of the process of training together.

Being mindful of your partner’s level of ability is not only compassionate and respectful but should, over time, help to push personal limits, as being supported by someone close to you helps to boost confidence levels.

Talking it through before the training process begins to determine what each person needs and how they can best achieve it minimises the potential for any strain later on.

It might work for couple to plan a combination of training together and separately in order to reach a desired fitness level.

Hilary Fannin: A trip to Belfast feels like a much longer journey
10

What will €180,000 buy you in Dublin and west Cork?
Real news has value SUBSCRIBE