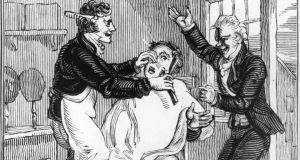 From the 1860s to the turn of the century it was the prevention, and restoration, of hair loss that was central to the profitable business of male – and sometimes female – grooming. Photograph: Getty Images

Hair-brushing by machinery was just one trend, available to Dubliners in 1864 at a number of city centre locations, including the Garrison and University Hair Cutter on Grafton Street, and Mons Pruvot’s on D’Olier Street where “Rotary Motion – Capillary Attraction” could be enjoyed while listening to “first class music on a first class Paris organ”.

In 1873, men attached the “Patent Moustache Protector” to their cups, “to protect the moustache from liquids while drinking”, and by 1890 the “Moustache Trainer” “for controlling and correcting this highly prized masculine appendage” had appeared.

However, from the 1860s to the turn of the century it was the prevention, and restoration, of hair loss that was central to the profitable business of male – and sometimes female – grooming.

Mr Fox promised: “Luxuriant Whiskers or Mustaches – My formula forces them to grow heavily in six weeks upon the smoothest face . . . and a sure remedy for baldness.”

JJ Graham & Co Medical Hall “had much pleasure in informing the Nobility, Gentry, and public generally that they have succeeded, after considerable research, in discovering a most effectual remedy for Baldness . . . ” Graham’s emphasised that their Alopecian Balm “had no injurious influence on the skin”. This was to distinguish it from concoctions which had been found to feature poisonous lead, making hair loss the least of a customer’s worries!

One such suspect preparation was Mrs S Allen’s “World Hair Restorer and Zylobalsamum”. Juxtaposed under reports of Fenian conspiracies, court reports and literary society notes, for decades this formula vowed to “restore faded Gray or Faded Hairs to its youthful colour” and “cause hair to grow on bald spots”.

Other hair and hair loss products had offensive, if not dangerous, ingredients. Bear grease was one common component, and King’s Spanish Onion Pomade – “It Never Fails” – noted in 1878 “all objectionable odour removed, retaining the wonderful stimulating properties of the Spanish Onion”.

Another more toxic Iberian ingredient, Spanish Fly – the beetle more commonly known as an aphrodisiac – was harnessed as the active ingredient in Alex Ross’s Cantharides Oil, “which speedily produce whiskers and thickens hair”.

Crushed beetles retained their popularity. Recipes for the preservation of hair in an 1877 column included: “Macerate a drachm of powdered cantharides in an ounce of spirits of wine. Soak it well during a fortnight, and then filter. Take 10 parts of this tincture, and rub it with 90 parts of cold lard. Add a little essence of bergamot, or any other scent. Rub this pomade well into the head night and morning. In ninety-nine cases out of a hundred, this application, if continued, will restore the hair.”

Ten years later a Ballybrophy reader was advised to apply “bone marrow with 60 drops of tincture of cantharides to the ounce”.

“Celebrity” influence was a common ploy to entice customers. Mrs Birch, Hair Cutter and Perfumer To HRH the Prince of Wales, recommended Paralachne Hair Restorer “ . . . for weak, falling off hair, or Baldness, and for the growth of Whiskers and Eyebrows.”

Fans of the Crown might also be persuaded by: “The Queen’s Hair Embellisher – Beethams Capillary Hair Fluid is now used by many of the Royal Family, and most of the Ladies and Gentleman at the Court . . . ”

Meanwhile, Mrs Terry, “patronised by the Royal Family, Nobility and Faculty” regularly visited Dublin to assist in the recovery of hair lost through “illness, or residence in warm climates, casual baldness, or gray hairs resulting from solicitude or morbid affections, hair that is inclined to weakness, or falling off from the head by continual parting, or any other cause”.

Advice from medical professionals was always newsworthy, like that from Prof Cameron at the 1873 Dublin Exhibition: “as long as the skin became rosy on friction it was possible to lessen the tendency to baldness. Friction was an excellent remedy – gentle but long-continued. If any application was really of use, phosphorized oil was the most likely.”

In 1876, a British consul in Russia vouched for a discovery: “One of his servants, whose head resembled the egg of an ostrich, was amazed to find a fresh crop of magnificent hair to appear. When trimming the lamps he was in the habit of wiping his hands, besmeared with petroleum, upon his bald head, and hence the ‘fresh crop’. . .”

“It’s A Fact”, declared the ads for M’Master’s Universal Hair Restorer “that the hair will never fall out if the skin of the head be kept free from disease, such as dandruff . . .” Scientist M. Serbouraud took a similar position in 1898, blaming a bacterial microbe for poisoning the hair at its roots. His proof? A rabbit inoculated with the microbe “was entirely bald”!

Countless other suppositions on hair loss were advanced. Dr Startin told the Hairdressers Guild in 1887 that, “ordinary baldness in men and women, apart from the natural falling off of the hair in old age, was due to fever, gout, much study, violent emotion, indigestion, want of proper attention in dressing, cutting and washing, tight hats, extreme heat or cold, tight plaiting, and the wearing of heavy pads or head-dresses.”

And in 1895 Dr Leslie Philips warned “. . . the ‘New Woman’ against wearing her hair short. The cause of baldness in man, he says, is the fact that he cuts hair . . . by clipping the hair we remove the gentle traction on the bulb and follicle which the natural weight of the hair exercises, and which constitutes the essential and natural stimulus to supply the hair-producing structures.”

Finally, in 1899 a hair transplant experiment is reported to the Constantinople Medical Society. Menahem Hodara “bores a hole in the scalp and inserts a hair, which sometimes takes root and grows”.

The time and pain involved in this procedure led our reporter to deduce that: “the remedy is worse than the disease.”