Why is the burn of chilli peppers addictive?

Now We Know: Answering the food and drink questions you didn’t even know you had 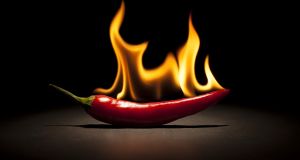 Does everyone have a friend hell-bent on blazing a trail at the table by eating the most intolerably spicy food available, almost as a point of pride? My friend Mike is like this. Whether it’s a vindaloo curry or a scorching hot sauce, the more tear ducts he can activate over dinner the better. What is it about that type of spicy heat that people love? Do some of us have more built-in tolerance to chilli peppers?

The burn of a chilli pepper, which is measured in Scoville heat units, comes from chemical compounds called capsaicinoids, which are found in the white flesh inside hot peppers, which is why recipes often suggest removing the seeds and white flesh of a pepper if you’re not into heat. According to bbc.com, “when you eat a chilli, the capsaicin is released into your saliva and then binds on to TRPV1 receptors in your mouth and tongue. The receptors are actually there to detect the sensation of scalding heat. Capsaicin makes your mouth feel as if it is on fire because the capsaicin molecule happens to fit the receptors perfectly. When this happens, it triggers these receptors, which send a signal to your brain, fooling it into thinking that your mouth is literally burning.”

How can we explain this counterintuitive love for willingly encouraging our system to think our tongue is on fire?

Though the jury is still out on whether variations in people’s TRPV1 receptors might make us more able for chilli heat, it’s believed that people who eat a lot of capsaicin become less sensitive to it. It’s possible that the post-pain is pleasurable, too. “The pain also leads to a release of endorphins, the body’s natural painkillers, which flood the diner with blissful feelings,” according to LiveScience.com.

People cosseted by civilization need a jolt, and roller coasters and hot peppers provide it

“No one has yet found a satisfying biological explanation for the persistent affection for chilli heat,” writes John McQuaid, author of Tasty: The Art and Science of What We Eat in an article for Forbes. “Chillies have only been part of human diets for 12,000 years, when people populating the Americas first encountered them, so we didn’t evolve eating them. So we end up in the realm of psychology and culture. For 30 years, the standard explanation formulated by Paul Rozin of the University of Pennsylvania is that it’s a form of thrill-seeking and/or benign masochism. People cosseted by civilization need a jolt, and roller coasters and hot peppers provide it.”

On the forefront of spicy bravado is Hot Ones, a heated web series hosted by Sean Evans who interviews celebrities while they eat increasingly spicy chicken wings. Whether it’s Chrissy Teigen, Anderson Paak, Ricky Gervais or Natalie Portman in the chair, the chats with Evans always start off politely enough accompanied by a moderately hot wing. It’s as the interview progresses that the intensity of the hot sauce begins to seriously impact the guest’s ability to answer Evans’s questions.

In the same way that chilli peppers themselves have a curious draw for us humans, so too does watching other humans, particularly famous ones, pushing through the spicy hot sauce pain barrier.