‘It’s in the blood’: Meet the women butchers

‘I just fell in love with it. But I got out of it a couple of times because it’s a tough job’ 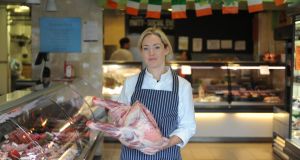 Kate McLoughlin and Sarah Madden are unusual in the Irish food scene: they are business owners and butchers who happen to be women.

McLoughlin now runs wholesale and retail businesses in Dublin’s Crumlin and Ballyfermot set up by her grandfather and her father. Madden is co-owner and operator with her husband Michael of The Village Butcher in Ranelagh, Dublin.

“It’s in my blood,” McLoughlin says.

Yet she didn’t want anything to do with the trade until, having completed the Ballymaloe cookery school 12-week certificate course, she went travelling and ended up working in a butcher shop in Melbourne, on Darina Allen’s advice. “I loved it, and I ended up calling my dad and saying ‘can I come home and give it a go?’ ”

By coincidence, Madden’s 24-year-old daughter Jessica is currently working in the same Melbourne shop where McLoughlin began her training. “She’s loving it,” Madden says, happy to have her daughter following her into the trade even though she acknowledges it can be a tough one for women.

“I’m in the business nearly 30 years, and I just fell in love with it. But I got out of it a couple of times because it’s quite a tough job. I don’t think I’d be where I am if I hadn’t married a butcher. I met Michael in the shop...he came in with a lamb on his shoulder.”

For most men hoisting a lamb over their shoulder is possible if not likely. For many woman it’s a tougher ask, not to mention handling beef carcasses.

“I got stuck in at the beginning, trying to break down beef, and physically I just wasn’t able; you’re at it with swords and knives,” McLoughlin says.

Both agree that in some aspects of the trade women excel – product presentation display and final finishing of meat being two. “We’re good at details. It might take us a bit longer, but the finished product is polished. It’s done right,” McLoughlin says.

Despite that they both find themselves being overlooked on the shop floor in favour of their male colleagues.

McLoughlin agrees. “Women are the worst. They wouldn’t necessarily know it’s my business, so they’re, like ‘no, I want the butcher’.”

Competition from supermarkets is hitting the trade hard. According to Madden, 30 have closed in the past 12 months.

“Everybody is struggling. There used to be a time when you knew that Mrs Kelly or Mrs Brown was going to be in at 10 on a Saturday morning and she was going to get either a roast or ham, and her steaks and her chops, but that day is gone.”

The customers who still prefer to shop with a butcher are changing too, becoming more knowledgeable and selective about specific cuts and more concerned about where their food is coming from.

“You can’t just say it’s Irish, they want to know who we bought it from, and where it came from,” Madden says.

“We’ve always been harping on about our south Leinster beef, our Blackstairs lamb, our Dunlavin pork, but it’s only recently that people are listening,” McLoughlin adds. “Everyone’s a foodie now, and that’s brilliant. Like with beef cheek. People wouldn’t have known what that was, but now because they’re seeing it on Jamie Oliver or on restaurant menus they want it.”

Restaurant menus are changing McLoughlin’s business in another way too. “If our name is mentioned on a restaurant menu we get people making a trip out to us because they want that côte de boeuf they had in the restaurant.”

Madden is on a crusade to get people cooking meat on the bone, and to start buying pork again now that she has found a supplier she rates highly in Colin Marry, whose pigs are fed a diet enriched with olives.

They both want to see an end to “the whole turkey burger thing”. They say that some gym-goers and customers of certain slimming groups are looking for turkey meat to the exclusion of all others. “And of course a lot of it is not Irish turkey,” says McLoughlin.