Female winemakers in the spotlight for Spanish Wine Week 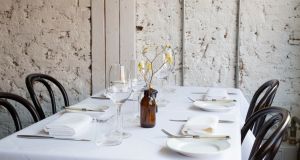 A winemakers’ dinner focusing exclusively on female winemakers and hosted by master of wine Lynne Coyle is a highlight of a diverse and comprehensive countrywide programme of events for Spanish Wine Week (April 8th-14th).

It takes place at Wilde restaurant at the Westbury hotel in Dublin 2 on April 10th, and will showcase the wines of Alicia Eyaralar of Bodega Tandem in Navarra and Cristina Bernero of Conde de Valdemar in Rioja.

The hotel also hosts a sherry masterclass in Balfes on April 8th with Gregory Buda of New York bar Dead Rabbit. Sherry is on the menu again on April 14th, when it will be paired with Irish seafood at Fish Shop in Queen Street, Dublin 7. This lunchtime event will be hosted by sherry expert Paddy Murphy and Rafa Salazar of wine importer Vinostito.

Food and drinks writer Aoife Carrigy takes on the challenge of matching wines from northern Spain with North Indian food at Pickle restaurant in Dublin 2 on April 9th, and Irish Times columnist John Wilson will reveal his choice of hidden gems of Spanish wine at the Legal Eagle gastro pub in Dublin 1 on April 12th.

Chef Blanca Valencia will host tapas and wine workshops at Cooks Academy in Dublin 2 on April 10th, and at Triggerfish Cook Shop in Blackrock the following day. There is a quiz and flamenco night at the Instituto Cervantes in Dublin, and throughout the week there will be informal tastings at wine shops throughout the country.

That’s one of the notable features of this promotion, run by Wines from Spain and now in its fourth year – there are events taking place across the country. Susan and Judith Boyle are hosting a natural and organic tasting at their family pub, Boyle’s of Kildare. Sommelier Niall Flynn is hosting a tasting at Sheridans in Galway, as well as matching Spanish sparkling and white wines with raw and cured fish and shellfish at Loam restaurant.

The Irish tapas and pintxo championships takes place in Tralee on April 9th-10th, to select a representative for the World Tapas Championships in Valladolid. The Twelve hotel in Barna brings the week to a close on April 14th with an afternoon of Spanish wines and tapas made with Connemara ingredients. spanishwineweek.ie.

Hazel Mountain Chocolate, a bean-to-bar operation based in the Burren in Co Clare, describes its cacao tea (€9.50) as a “calorie-and-guilt-free, mood boosting antioxidant powerhouse”, and it tastes pretty good too.

Served hot or cold, the brew is a byproduct of the chocolate-making process, made with the outer casing of the beans which is removed after roasting.

Luke Conroy, general manager, says the company’s blend, which has rose petals, cardamom and vanilla, mixed with cacao peel, “goes toe-to-toe with our hot chocolate in both taste and sales”. For a cocktail with a difference, Conroy suggests cold brew cacao tea mixed with sparkling wine.

Hazel Mountain has also introduced a chocolate and plum chutney to its range. Red onions, plums, raisins and prunes are mixed with cacao nibs and cacao butter in this sweet and savoury condiment (€5.95). Both are on sale online and from stockists including Fallon & Byre and Irish Design Shop in Dublin.

Bill O’Dea, one of Ireland’s foremost mushroom experts, is running a course in mushroom growing that will equip participants with the knowledge and the kit to begin producing their own crop.

It is the first time he has offered the course and it is being taught by Matthew Rooney, who has been growing mushrooms in Essex in the UK for more than 20 years. According to O’Dea, Rooney’s Gourmet Mushrooms Ltd is the first certified biodynamic mushroom farm in the world.

The course will take place in Dublin over two days on May 18-19th (10am-4pm), and will be limited to 15 participants. The fee is €190 to include instruction, starter pack, lunch and refreshments on both days. mushroomstuff.com.

The Merrion chefs regroup for charity

Gareth Mullins, who is executive head chef at the Marker Hotel and newly appointed commissioner general of Euro-Toques Ireland, joins his Merrion hotel counterparts Ed Cooney and Paul Kelly, and Odran Kelly, who heads the kitchen at The Rose Hotel in Tralee, to cook for a charity fundraiser on April 5th.

The four worked together at The Merrion 20 years ago, and will be reunited in Tralee to cook for the Recovery Haven Kerry Cancer Support House. Tickets for the six-course dinner, with welcome drinks and wine pairings, are €80. For reservations, phone 066-7199100.