Ghost estate turns into holiday village with a new restaurant

Food File: Four of the country’s most exciting destinations for food fans 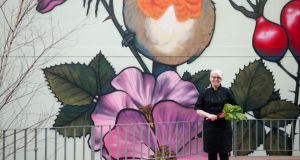 Bríd Torrades at Osta@W8, a restaurant, coffee shop and bakery at a new holiday village, W8, in Mahorhamilton, Co Leitrim.

Bríd Torrades, who runs Ósta Café and Wine Bar in Sligo town has taken on the running of a food venue that will include a restaurant, coffee shop and bakery, at a new holiday village in Manorhamilton, Co Leitrim.

Osta@W8 will open in the first week of April and will be forging strong links with local food producers.

“We will be baking traditional breads, which will be delivered before breakfast to the self-catering houses, using locally roasted coffee in the cafe, making long fermented pizzas and slow cooking Thornhill ducks in our wood-fired oven, pickling and fermenting, and we hope to make our own mozzarella and ricotta.”

Torrades points out that The Organic Centre is nearby and McNean House and Restaurant is within a 15-minute drive.

“This area has potential to become a mecca for people interested in authentic food experiences,” she says.

But that hasn’t stopped them creating a range of 11 marmalades that have just won three silver medals at the World Marmalade Awards, held annually in Cumbria in the UK.

The couple, who make their marmalades, jams and preserves in New Ross, went to Seville to source organic oranges from Ave Maria Farm, and to Sicily, where they found lemons, clementines and blood oranges at an organic fruit farm, Il Biviere, near Catania.

“We met Giangiacomo Borghese who owns and runs the farm and we now buy direct from him ,” Laura says.

Their Sicilian lemon marmalade was just one point off gold at the awards, and they also took silver for their Seville orange variety, and the Simply Better orange marmalade they make for Dunnes Stores.

They are calling it Séasúir, and it will have a focus on nose-to-tail eating and “forgotten foods”.

The five-course menu will cost €50 and it is a BYOB event.

On Tuesday nights , April 2nd and May 7th, chefs Paul Flynn and Sam Burfield are tearing up the à la carte menu at the Tannery restaurant in Dungarvan, Co Waterford and replacing it with what they are calling a Tuesday Feast Menu, with five courses for €42.50 per person.

The new initiative had its first outing on Tuesday of this week, and for the launch, guests were offered smoked aubergine hummus with olive salad and flatbread; roasted heritage carrots with feta, orange and cardamom butter; grilled fish platter with lovage butter and fried brioche; roast poussin with za’atar and peas à la crème, and malaba, a rose and raspberry dessert.

B&B accommodation will be available for €100 double or €70 single on those Tuesdays, and the Tannery’s spring break offer of €110 per person for dinner, B&B will apply March to May.