Fish fingers are a simple way to get some fish but why do some have sugar? 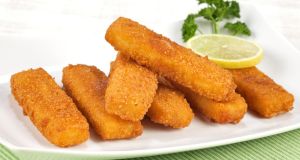 Fish fingers have omega-3, a type of fatty acid that has been credited with helping to boost brain power in children because it plays a role in brain development and function. Photograph: iStock

If Captain Birds Eye is looking particularly pleased with himself these days, it’s not just because he has been reincarnated in the form of a handsome Italian watersports enthusiast. It may also be because the old sea dog can boast that his fish fingers are helping the seas to recover.

That may be stretching it but the Marine Conservation Society in the UK said recently it had found that 85 per cent of fish in 48 brands it looked at were from top-rated sustainable sources. In its report, the society notes that a lot of brands don’t highlight the fact that their fish is from a sustainable source, though they could.

That’s not the case with Birds Eye. On the front, its boxes have a blue logo with a tick inside and the words “Certified Sustainable Seafood MSC www.msc.org”.

This isn’t just empty marketing speak. It refers to the fact the Marine Stewardship Council, a British non-profit organisation, conducts “objective third-party fishery assessment using scientific evidence”, according to its website. The MSC Fisheries Standard is based in part on the UN Fisheries and Agriculture Organisation’s Code of Conduct for Responsible Fishing. This is confirmed by external auditing to the Global Sustainable Seafood Initiative benchmark.

Birds Eye goes one better and, as is explained on the back of the packet, if you go to the website and feed in the code next to the “best before” date, it will tell you where the fish in that box comes from. Find the provenance tool and you will have an answer. The number 27-01E on packets I picked up indicated that the fish was Atlantic cod from the north-east Atlantic, north-east Arctic or Norwegian Sea. It was caught with trawls, seines, lines and hooks, gill nets and similar.

Cod gets the MSC tick of approval too as stocks were deemed last year to have recovered from near collapse. It’s the first time in 20 years this has happened and it’s the reason there is so much cod on sale again. As of 2017, Birds Eye got 90 per cent of its fish from sustainable sources, according to its website, and it plans to hit 100 per cent by 2025.

So what else can you tell from the packet? Fish fingers have omega-3, a type of fatty acid that has been credited with helping to boost brain power in children because it plays a role in brain development and function. Lots of brands, including Dunnes Stores’ own brand and Birds Eye and Young’s, note that the fingers are “a source of omega-3”.

The type of white fish used in fish fingers, however, such as cod and pollock, has a lot less omega-3 than oily fish such as salmon or sardines. If my maths is correct, salmon has about three times more.

Fish fingers are still a good way to get the wary to eat fish. After Birds Eye developed fish fingers, it created the tagline “no bones, no waste, no smell, no fuss” and that still holds. So what else is in there? Nothing too odd, it seems.

Dunnes’ Alaskan Pollock fish fingers have 65 per cent fish fillet, then some fairly standard batter ingredients. These include potato starch, wheat flour, salt, linseed oil, breadcrumbs, spices and rapeseed oil, which incidentally has some omega-3 too. Under the nutrition information, it also notes there is 0.17g of omega-3 fatty acids in each fish finger.

Some brands seem to have more omega-3 than others despite using the same fish. Birds Eye’s box of 18 fish fingers uses just 58 per cent fish but keep reading the ingredients and you will see that the bread-crumb coating contains fish oil too. So they have 120mg of DHA and 231g of EPA& DHA Omega-3. Seems like a clever plan as long as they taste good.

Buy a box of 14 Alaskan Pollock fingers from Birds Eye and there is no added fish oil. They are made with 62 per cent fish fillet and a standard batter, but there is no mention of omega-3 levels on the box. The only separate nutrient mentioned in the nutrition labelling is selenium, which we all need.

Most brands don’t have sugar in the ingredients, but Tesco Finest chunky cod fish fingers has, where it appears as glucose syrup. So they are best avoided.

There’s not a lot of fish in fingers compared to a full-size fillet, but they are an easy way to have fish. The only question for Captain Birds Eye now is whether to fry or grill them.