What does a 100-year-old biscuit taste like? We try the wartime biscuits made by Jacob’s 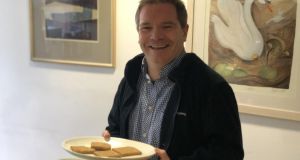 Ronan McGreevy with the wartime biscuits reproduced by DIT’s bakery department for a history exhibition.

The Jacob’s biscuit factory in Dublin was one of the biggest private employers in the country during the first World War. Some 3,000 workers were employed between it and its sister facility in Aintree, Liverpool, producing 1.2 million packets of biscuits a week for soldiers at the front.

Business boomed, aside from Easter Week 1916, when the factory in Bishop Street was occupied by Comdt Thomas MacDonagh and the men from the 2nd battalion of the Irish Volunteers. Little fighting happened there and the factory was able to continue its work after the Rising.

Jacobs produced the dreaded “hard-tack” biscuits for the front. These tasteless staples of generations of fighting men were regarded as a loathsome necessity given their portability. They were responsible for breaking the teeth of hundreds of thousands of servicemen.

Jacob’s also produced the so-called Verdun biscuits. The reason why the biscuits were named after the terrible battle between the Germans and the French in 1916 is not known, but they were first produced from a recipe produced in 1917. They were regarded as a treat for soldiers, being a lot softer than hard-tack biscuits, with just a faintest hint of coconut.

Whether they would be regarded as a treat for contemporary tastes is another matter. Most of the ingredients are familiar, but what was nucoline when it was at home or laitine?

Nucoline turned out to be an early form of margarine, but the origins of laitine could not be traced, though judging by its name it was probably a form of milk powder. Other ingredients included flour, wheatmeal, maize blend, biscuit powder and dark sugar.

They also contained lashings of lard. “They had no fear of animal fat, that’s for sure,” said design historian Wendy Williams who discovered the recipe when she was curating an exhibition on Jacob’s.

She gave it to the School of Culinary Arts and Food Technology in DIT and Darren Harris, the course director for baking, took on the challenge of reproducing the recipe as a test project with DIT Culinary Arts students.

Ms Williams said they have received a mixed reception from people who have tried them, but their robustness cannot be doubted. “They were made to last. You could drive a tank over them and they wouldn’t be affected.”

Jacob’s has a connection with the first World War that endures to this day. Their USA range of biscuits were first introduced in 1918 to celebrate America’s entry into the war.

So what do they taste like? We asked a panel of hungry journalists for their verdict:

“Edible, but only just.”

“Rotten, but I think if I was in the trenches I’d be looking forward to them.”

“If you went to a fancy cafe and someone told you they were Paleo, you’d say they were quite nice.”

“I think they taste fine.”

“They’re not horrible, but they’re not nice either.”