The thought of fish spotting something bright in the water and thinking ‘Food!’ makes me feel queasy and guilty 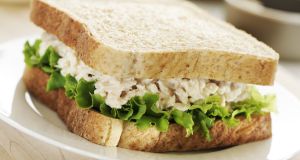 “Plastic. It’s everywhere. It’s clogging up the oceans, killing seabirds and sea mammals. And it’s there in the fish on our plates and the fish in our cans.” Photograph: iStock

I ate my last tuna sandwich last week. It was homemade and not at all bad, if I say so myself. I used some really nice soda bread from a local bakery, mixed the tuna with a little red onion, added the correct amount of mayonnaise so it didn’t go all squishy and topped it off with some black pepper.

It wasn’t a last-meal kind of scenario. I didn’t prepare all of this thinking well, that’s that. My very last taste of tuna. Farewell to all things tuna-related.

I just ate it and thought, I think I’ve had enough of this.

And the thing is, as an almost-vegetarian, tuna sandwiches had stood me in good stead. They were a great stand-by at meetings and work events when the veggie alternatives were especially sad or deficient in number or being launched into enthusiastically by carnivores who’d plenty of other options on the go.

Plastic. It’s everywhere. It’s clogging up the oceans, killing seabirds and sea mammals. And it’s there in the fish on our plates and the fish in our cans, insidiously working its way into the food chain, like Frankenstein’s monster, come back to take revenge on its creator.

I’m not particularly a foodie. As a middle child, I was an early adopter of the clean-plate syndrome. There was nothing I wouldn’t eat. Well, apart from tinned spaghetti, that is, whose loops and squiggles slopping around in that fluorescent orange sauce somehow managed to turn my stomach when nothing else did.

As I say, I’m a kind of veggie. I lived in Japan for a while and got used to doing without meat. Not that meat wasn’t available but fish tended to be on the menu in people’s houses and at work dos and I took to a meat-free existence without giving it much thought.

So I more or less stuck to that when I moved home. More or less.

I don’t buy meat or cook meat or order it out. But I’ll happily eat it if it’s put up to me in someone’s house and I will clean the plate when it comes to my Christmas dinner, shovelling great mounds of bread sauce onto slices of turkey.

So I’m a creature of contradictions, like most of us. Although I do admire others who are better at sticking to their principles. I have a friend who’s vegan and goes through life being confronted by the question ‘Why’ in a myriad of forms, accompanied by much concerned talk of balanced diets by people whose relationship with nutrition is passing at best.

I’ve also always been frustrated by the exasperation with which vegetarians and vegans are regularly met. It seems we’re out there creating a fuss. Such a fuss.

And yet, I would argue, nothing like the fuss regular meat-eaters are producing, what with the laying waste of vast tracts of land for pasture with hugely significant repercussions in greenhouse gas emissions.

But that’s for another day.

Back to my tuna.

Throughout it all, I’d never given up on fish. Whenever a forlorn goat’s cheese tartlet or congealed pasta was presented as the vegetarian special of the day, I had no problem opting for prawns or haddock or whatever fishy dish was on offer.

It’s not that I now think eating fish will kill me slowly and painfully. We all have to die sometime. It’s just that the idea of those fish spotting something bright and attractive and plastic in the water and thinking ‘Food!’ makes me a little queasy. And also slightly guilty.

And who wants to eat their dinner feeling queasy or guilty? So from a shopping and cooking and eating-out perspective, I’m going to bail on fish.

And I’ll just fight off those meat-eating mavericks coming for my veggie sandwiches down the line.