What's really in your bowl of porridge?

Many claims are made about the value of oats. But can you believe them? 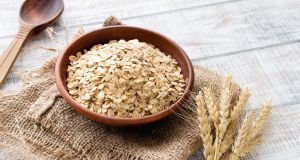 There is plenty of conflicting advice as to what to have for breakfast and even whether we should eat in the mornings at all. But one grain that unites many is oats. Whether you choose jumbo, pinhead or progress, eating oats is generally seen as a good idea by dieticians and bloggers alike.

You can read all about why that is on some packets of porridge oats. Take Flahavan’s, for example. The key to their popularity is on the side of the packet. There is only one ingredient – 100 per cent wholegrain rolled oats – and it’s nutritious. “Wholegrain” means that the whole of the edible part of the grain is used, which includes the germ, endosperm and bran. The bran and germ are removed from refined grains so they are lower in fibre and nutrients.

The nutritional information table underneath shows that the product is low in saturated fat and sugars, but has good levels of fibre and protein. It also shows that oats contain iron and thiamin, an essential micronutrient also known as vitamin B1. These have not been added but are naturally occurring.

There is even better news in the notes under the nutrition table. It explains they contain beta-glucans and what they can do for you. “Beta-glucan is a soluble fibre found in oats and some other foods. Regular consumption of beta-glucan as part of a varied, balanced diet and healthy lifestyle can contribute to the maintenance of normal blood cholesterol levels,” it reads.

There’s no need to dismiss this as usual marketing-speak found on some packaging because there is clear regulation governing the nutrition and health claims made in commercial communications, such as on labelling, presentation or advertising, according to the Food Safety Authority of Ireland. This means the product must be shown to have “beneficial nutritional or physiological effects established by generally accepted scientific principles”. So any claims made must stand up to scrutiny.

The regulation also says, “The beneficial nutrient or substance for which the claim is made [should be] present in the final product in a significant quantity.”

This means that iron can be listed in the nutritional table on Flahavan’s oats because it makes up about 1.4mg of a serving. There is no mention of the other minerals in oats, such as zinc, magnesium or selenium, because there aren’t enough of them in a bowl of oats to get excited about. They are still there though. The nutrient must also be in a form that is bioavailable, which means “available for use by the body”.

In addition, the beneficial effect has to be provided by a “reasonable quantity of the consumed product”. So a reasonable amount oats must have an adequate amount of the active nutrient. Flahavan’s highlights how well its oats do on this score to the consumer by writing, “Each serving (40g) contains one-third (1g) of the 3g of beta-glucan suggested per day to help maintain normal cholesterol levels.” This is helpful as 40g dry weight of porridge makes quite a good serving.

Compare Flahavan’s or Odlums porridge oats with Ready Brek and you might be confused into thinking it was naturally healthier than the traditional ones. The front of Ready Brek trumpets that it is “rich in calcium” and is a “source of vitamin D”. The nutrition information on the back then indicates that it also has riboflavin (vitamin B2), niacin (B3), B6, B12 and folic acid.

What might not seem obvious is that these have been added during processing. Check out the ingredients and you will see Ready Brek is made with: wholegrain rolled oats (60 per cent), wholegrain oat flour (38 per cent), calcium, niacin, iron, riboflavin (B2), vitamin B6, thiamin (B1), folic acid, vitamin D and vitamin B12. So those extra vitamins and minerals have been added in. There’s nothing wrong with that, but it is good to be aware of why it can make such claims.

Ready Brek, which is made by Weetabix, is streets ahead of any sugary cereal but is not seen as being quite as good as other porridge.

It appears as a mush because it is very finely milled. Regular porridge oats, such as those from Flahavan’s or Odlums, take longer for the body to digest. This means they release energy more slowly so you don’t feel hungry so soon.

Even better in my book is that it is easy to get Irish-grown and milled oats for a reasonable price. Flahavan’s has a stamp on the front cover of its progress oatlets to say they are grown and milled in Ireland.

You can’t get clearer than that.