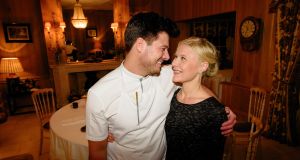 The first reviews are in – even before the restaurant is built – and they’re resoundingly positive. Aimsir’s time hasn’t quite come, but the clock is ticking, and anticipation is mounting around this new addition to Cliff at Lyons in Co Kildare.

The opening date for the new 24-seat restaurant in the gardens of the hotel has been pushed out to March, but a series of preview evenings – Elements of Aimsir – launches tonight, and a press preview was held last night. Afterwards, the consensus was that this is a very exciting and welcome addition to the Irish dining scene. Tickets for the one-off residency, staged in a cottage on the estate, sold out rapidly.

The premise for the newcomer is unusual. It is being billed as “an all-island restaurant”, with only seasonal ingredients that are native to Ireland being used in the kitchen. That means no lemon, no black pepper, and plenty of other chefs’ building blocks out of reach, too. Even things that are not indigenous, but can be grown here in polytunnels, are out of bounds.

The couple have spent the past year traversing Ireland, from coast to coast, north to south, to fill their larder with the best that the country has to offer. They have been meticulous in their research, and have made some ground breaking discoveries. They’ve even managed to find a producer of refined sugar in Co Kilkenny, to supplement the honey their own beehives are contributing.

Elements of Aimsir was billed as “an introduction to Jordan’s cooking and a chance to experience Majken’s hospitality.” Each evening of the pop-up, 10 guests will sit around a circular table in one of the estate’s restored cut-stone cottages, for what is billed as a four-course menu (€100). But with the addition of snacks, a bread course and petits fours, there are many more elements; the press preview ran to 10 individual dishes.

Matching wines are from the organic, natural and low-intervention spectrum. Beer – they have struggled to find an Irish organic one they liked – and a dazzling array of complex and creative non-alcoholic juices and ferments dreamt up by Bech Bailey, also feature.

The couple have been joined in the project by newly recruited chef de partie Tom Downes, who worked with Bailey at Maaemo, and by assistant manager and sommelier Cathryn Steunenberg, who was formerly at Chapter One and Ashford Castle

Bearing in mind Bailey’s pedigree, and what the couple are setting out to achieve, there has been considerable interest in the project. “So, does he have a good understanding of the Irish palate?” pinged a message on my mobile as we ate; a question from a chef pal, hungry for a taste of what is to come.

The answer to that question can be found in the very first thing that featured on the menu – potato – with cheese and garlic. But not as you might imagine it. Ballymakenny Farm’s Violetta potatoes had been hollowed out and filled with Boyne Valley Bán cream, pickled Drummond House black garlic and scapes.

For the bread course, there was no sign of the ubiquitous sourdough. Instead, Bailey served brown soda bread, based on a recipe in an old Irish cookbook he picked up in a discount store, and made with Ballymore Organics heritage wholegrain flour. On the side was a pat of butter made with organic, raw cream from Owen and Mimi Crawford’s micro-dairy in Co Tipperary

In the succession of intricate, incredibly delicious dishes that followed, a narrative emerged, and it had a comforting familiarity to it. The reason, of course, being that absolutely everything (except the wine), arriving at the table was thoroughly Irish in its origin.

That’s not to say Bailey isn’t making magic with this country’s bountiful larder. Cooking on a domestic Aga, and without access to the usual array of chefs’ tools and toys, he and Downes sent out a succession of mini masterpieces.

The arrival of the mallard ducks, presented whole to the table, was preceded by their hearts, skewered on twigs and served with an emulsion of duck fat. The mallard returned to the table in wafer thin slices, with “honey infused dandelion root, smoked beetroot with rose petal, over-ripe rosehip conserve and mallard bone sauce”.

Newgrange rapeseed ice cream with sea buckthorn, pumpkin juice and pumpkin seed brittle was in danger of being overshadowed by the wine that accompanied it. Killahora Orchards Rare Apple Ice Wine 2017 vintage won’t be bottled until early next year, but an unfiltered sample obtained for the pop-up marked this Co Cork beverage out as one to watch.

The reservations book for Aimsir at Cliff at Lyons opens next month.