What does Burger King’s new veggie Whopper taste like? 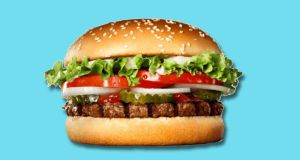 Burger King’s Rebel Whopper, which went on sale here yesterday, is rebellious because the beef that normally sits in its seedy buns under a pile of wilted lettuce, onions, pickles and that gloopy mixture of mayonnaise and ketchup has been axed.

In its place is an achingly on-trend soya-and-wheat combo that has been mixed with a mishmash of vegetable oil, salt and flavourings to create a patty that is, weirdly, almost indistinguishable from that in an old-school Whopper.

The Rebel is one of the biggest product launches in Burger King’s 65-year history and is perhaps an even bigger deal for Unilever, owner of the Vegetarian Butcher, the Netherlands-based company behind the plant patty. (The US version, made by Impossible Foods, can’t be sold in Europe, as it contains genetically modified ingredients that the EU requires to be tested before it is allowed to go on sale.)

Burger King isn’t calling the nonmeat Whopper vegan, as the patty is cooked on the same grill used for meaty burgers and dressed with regular, traditionally eggy mayonnaise. (It also has much the same calorie count as a normal Whopper – about 610 compared with 640 for the meat version – and is much the same price.) But the fast-food giant is still hoping the Rebel will allow it to catch the plant-based wave.

In the name of research, The Irish Times goes into a Burger King in Dublin and asks for a Rebel Whopper with all the nervousness and shame of a teenage boy buying a racy magazine in one of those luridly lit “adult entertainment” stores on Capel Street.

“CAN I HAVE A REBEL WHOPPER!” the server bellows to some faceless attendant in the background before adding in a quiet voice that I am among the first people to order the plant patty in this temple to meat. “I think they will fly, though, because they are new, and people always like to try the new things,” she says.

Moments later I am walking to a table with a bundle of green-tinged waxy paper that looks a little lost and lonely without a soft drink and fries to keep it company. Then I divest the Rebel of its wrapping and poke and prod it like a doctor carrying out a particularly intrusive medical. It looks for all the world like a regular Whopper, right down to the grease-slicked patty at its core.

I hold a piece of the thin patty up to the light. It is grey and greasy and would be unlikely to find many takers were it served without all the accoutrements

I take a bite and am transported, like Marcel Proust, back to my youth, to a time when I didn’t give a rashers what I ate or what it might do to my heart or my waistline.

The Rebel tastes like any other Whopper I have ever had, which is to say it tastes primarily of onions and gherkins and bread and mayonnaisy ketchup, with a hint of meaty goodness hiding behind all the bit players.

The texture is fleshy, for a plant, as is the taste. I stop eating my burger halfway through and tear it apart to better examine the contents. Under the suspicious eye of staff and fellow diners, who clearly think I am drunk, I hold a piece of the thin patty up to the light. It is grey and greasy and would be unlikely to find many takers were it served without all the accoutrements.

But this is a burger that will rarely be seen naked by the general public, and it will surely serve its masters well, not least because, in addition to tasting grand, it comes with novelty and a hint of smugness, which sounds like an almost irresistible meal deal.

Burger King’s Unbelievable Chicken King, another vegan burger, which has been on sale in Sweden, comes next. It remains to be seen if it will fly.