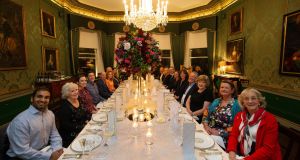 Food Month at The Irish Times continues throughout November, and there are lots more events coming up that readers can get involved in, including an Indian brunch, with cocktails and conversation with internationally renowned consultant chef Alfred Prasad, at Doolally in Dublin 2, on Saturday, November 16th.

Tickets for this go on sale on Friday at 9am, and can only be booked through a link sent to members of the Irish Times Food & Drink Club. The club is free to join and you can sign up here.

This week, club members participated in one-off Meet the Chef events at a Michelin-starred restaurant, and in a private dining room in a five-star hotel that has played a significant part in recent Irish history.

On Sunday evening, chefs Damien Grey, Mark Moriarty, James Sheridan and Ciaran Sweeney gathered at Grey’s restaurant, Liath, in Blackrock market and cooked an eight-course menu, two courses each, for 18 members of the club. They also chose a wine to serve with each dish, and there were some memorable pairings.

These were possibly the fastest selling food event tickets in Eventbrite history – four of Ireland’s top chefs reunited in a restaurant that has shaped their careers in a significant way – and the sold out sign went up in just a couple of minutes. One guest revealed that he had four screens logged-on and ready to pounce the minute they were released.

In addition to cooking, serving and introducing their food, the four talked about how their friendships were forged in this former market cafe premises, now a Michelin-starred restaurant, and how their careers have progressed.

On Tuesday, Food Month action moved to the historic surroundings of the Constitution Suite at the Shelbourne Hotel in Dublin, where executive chef Garry Hughes and head sommelier Nisea Doddy hosted a Champagne and canape pre-dinner reception, followed by a five-course menu of the hotel’s signature dishes.

Chef Hughes shared his insights into how to the hotel’s kitchens run, as well as offering tips on how to cook the perfect beef Wellington and pommes Anna. A special feature of the evening was an interesting talk by head concierge Denis O’Brien on the history of the hotel, and stories about some of its famous guests.

For more information on Food Month at The Irish Times, see irishtimes.com/foodmonth #ITFoodMonth