Stillorgan institution calls it a day: ‘We wanted to finish on a high ... this is the best way to go’ 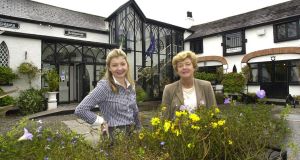 The Beaufield Mews restaurant in Stillorgan, Co Dublin, is to close its doors for the last time at the end of this month bringing an end to service after more than 70 years.

“We wanted to finish on a high,” owner Julie Cox told The Irish Times. “We had a brilliant summer and were really busy and I think this is the best way to go. I want to do other things.”

One of the oldest standalone restaurants in Ireland, Beaufield Mews has served half a dozen sitting presidents and countless celebrities including Rock Hudson, Bjorn Borg, Bono and Joe Dolan.

It has also hosted the weddings of thousands of Irish couples including authors Joseph O’Connor and Marian Keyes.

And it all happened almost by accident.

In the 1930s Eddie Kirwan bought the then derelict Beaufield House and its falling down coach-house in the south Dublin suburb with a view to turning it into flats.

As there was tax relief available to people who rented furnished rather than unfurnished rooms, his wife, Gogo (aka Doreen), took on the role of buying tables and chairs for the properties.

But she had a tendency to buy too much and the excess ended up being stored in the coach house.

She then established a pop-up shop (long before such a concept was a thing) to sell what wasn’t needed in the big house and ended up serving tea and biscuits to customers after which her accidental pop-up grew into a restaurant.

Cox is a granddaughter of Gogo and Kirwan and has been running the business for two decades although it has always been a central part of her life.

“We did our first wedding in 1950,” said Cox. “That was when there were wedding breakfasts because people had to be married before midday. They would come in for sherry and for hors d’oeuvres. We were always great value for money.”

A 1963 “fork luncheon” wedding breakfast for 38 guests cost 17 shillings and six pence a head while four bottles of Superior Liebfraumilch cost £3.12s.0d and a bottle of Amontillado cost £1.

Receptions always started with the sherry and if people wanted a glamorous starter they would have prawn cocktail while the main course was almost inevitably sirloin of beef with the dessert trolley universally popular.

In the 1980s, Beaufield Mews was extensively remodelled by Julie’s parents Jill and Brian and in 1988 became the first restaurant in Ireland to get a special licence allowing it to sell spirits and beer as well as wine.

While it has been in the family, since the 1930s, it has also been hugely important to head waiter Paddy Rice who has been with the family for almost half a century.

He looked after six Irish presidents and several taoisigh, as well as host other well-known faces. Jack Charlton and his entire Italia ’90 football squad celebrated Liam Brady’s testimonial dinner there in that most auspicious year.

“He started under my grandmother and worked under my mother and now me. The thing is he’s the boss really but he is 72 and I think he’s relieved because he couldn’t really imagine retiring and having the place go on without him. It’s nice for us to be closing and for him to be retiring at same time.”

She admitted that she will miss the restaurant when it is gone.

“Of course I will but I’m going to take a little bit of time off and then I will reinvest myself in something else.

“Working in a restaurant is very labour intensive. You always have to give 110 per cent. I have been doing it for 20 years and I didn’t really want to see the name tarnished or the standards slip so either I had to stay on or it had to go.”

As to the future of the premises, she said she and her siblings had not “really thought too much about what we’re going to do with it yet. We will close the doors on September 29th and then give it some thought.”

She said they had been “inundated with really lovely messages. This is something positive we’re going out on a high and that’s really what I want.”