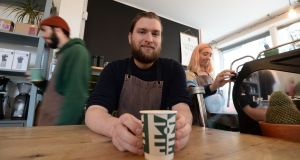 Niall Wynn, owner of the Proper Order Coffee Company in Dublin’s Smithfield, with one of his compostable coffee cups. Photograph: Alan Betson

A proposed new levy on disposable cups will unfairly penalise coffee shops and consumers who are already committed to moving away from single-use plastics, coffee shop owners have said.

A public consultation on a range of levies has been launched by Minister for Climate Action and Environment Richard Bruton. The new taxes would be rolled out on a phased basis from 2021, adding between 10 cent and 25 cent to the price of a takeaway beverage sold in a single-use cup.

Coffee shop owners have expressed concern that the measures will penalise those already doing what they can to reduce the amount of plastic their businesses create, and treat them in the same fashion as those who have displayed little or no environmental consciousness.

“Rather than punishing every coffee shop maybe the Government should look to reward coffee shops that are already trying to do their bit for the environment,” said Niall Wynn of the Proper Order Coffee Company in Dublin’s Smithfield.

He said there were many coffee shops “making huge strides to be more environmentally aware”. They would be impacted by the levy just as much as “the coffee shops that aren’t making any effort at all”.

He said his own business had made significant inroads in the move away from single-use plastics. They had invested in a milk machine which used large bags of milk rather than plastic cartons, had taken away plastic stirrers and served takeaway coffee in compostable cups.

“In the past we are getting two bin lifts a week for our plastics and other recyclable materials but now we’re down to one bin lift every two weeks.”

He and his customers risked being punished with the proposed levies. “I can see the logic of it, but I think we would be better off incentivising people to be more environmentally conscious rather than penalising everyone.”

Adam Fleetwood of the Greenville Cafe on Dublin’s Tara Street agreed. “We only have compostable cups, and we give everyone who comes in with a keep cup a discount.”

He accepted that the levy would have value and could help change people’s habits, but called for more and better recycling facilities to be rolled out alongside the new measures.

Green Party councillor and enterprise spokeswoman Hazel Chu said the levy would only prove to be a positive if it was “done in the right way”.

She suggested the Government might be guilty of “a little bit of greenwashing” by creating the impression that it was tackling a seriously environmental issue when it was only scratching the surface.

A survey published last year found that 250,000 disposable coffee cups could be diverted from Irish landfill through the introduction of a levy alongside other environmentally friendly measures.

The study from Amárach Research found that on average Irish adults buy four hot drinks a week, with around two million plastic cups are being sold every day with few of them recyclable.

While the levy on its own would see the amount of takeaway cups thrown away daily by Irish consumers fall by 70,000, that number could increase by more than 300 per cent if combined with other positive behavioural nudges including discounts for using reusable mugs, being given a free reusable cup or a refund for returning a plastic cup.