A hot tub, a trumpet and ‘caravan cleaner’: Your craziest Aldi and Lidl purchases

‘One Thursday night I bought a chainsaw and a bottle of wine. A strange combination’ 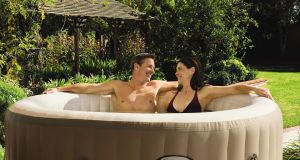 An Aldi hot tub, which sold out online within hours. The budget supermarket made a splash when it revealed the inflatable four-person Spa Pool, featuring “120 jets and a powerful heater for ultimate comfort”. Photograph: Aldi/PA

We asked readers on Twitter about their best middle aisle purchases. Out of the hundreds of responses, here are some of our favourites:

Got a hot tub in Lidl, it was amazing. Used it for 365 days straight in west Kerry. It died recently but will buy another next time it’s in! - Cian O’Driscoll

First time I ever went into an Aldi, I came out with a pair of ski gloves. I had never skied before, and have never skied since. I’d love to know what I was thinking. - Jon Leigh

Went in looking for engine oil, came out with a printer and a doormat. - Barbara Elliot

A paper guillotine. I maintain that someday, in the near or distant future, I will have “just the thing!” - Claire Kenny

Maybe not a mad thing to buy, but the combination of a chainsaw and a bottle of wine on a Thursday night at 9.55pm felt strange to me. - Susan Parkes

Tarpaulin. I don’t have a tent or a garden. I just thought a bit sturdy green waterproof sheet may come in handy sometime. I went in for a packet of ham. - Rachel Schoene

A car bin (which I promptly christened Jeremy Carbin). I never opened it and now it’s part of the rubbish in my car. - Peter McGuire

I bought a bottle of “caravan cleaner”, but I don’t own a caravan! Still sitting on a shelf in my garage. - Fionnuala McGrath

Went in for apples, came out with a leaf blower with a really short cord that had no hope of reaching anything. I bought a ukulele there, a vacuum sealer, a table, a hedge cutter, bongos ... - Deirdre Clifford

My husband went for milk came back with a ukulele! - Grace Rattigan

A laser-guided angle grinder. Matching Christmas sweaters for me and my dog (I queued outside for the latter!) - Ciara Byrne

“Pawsecco” for my cat and a bottle each of “Bottom Sniffer” for my two dogs. And I’m not ashamed of it either ... ok, I admit I am. - Simon Cullen

“Crochet your own Mickey” just because it gave me a giggle. - Barbara Franzombie

I went into Lidl Doughiska with a trolley and a €20 off €100 Sunday Independent voucher, and bought 67 bottles of Franziskaner Weissbier that were on a four for €6 offer at the time. The cashier fist-bumped me. - Klaus Göttsche

Last December I met a man in the queue in Lidl Dunshaughlin, in his late 60s, buying a remote control giant tarantula. He was planning to put it in the bottom of his wife’s bed and scare the bejaysus out of her. Ahhhh romance! - Tanya Grogan

Went in for olive oil, came out with a bicycle stand. - Peter Rafferty

A kayak. Still in its box. Lives by the front door to remind us not to do that again. - Gary Ryland

A doughnut maker (used a bit), a crochet your own sloth set (totally not for beginners, sloth never happened), a DIY macramé set (because I didn’t learn from the sloth incident), an engraving tool, which is yet to engrave anything. The list goes on! - Mags ODonoghue

I got the burning wood engraving thing! And a crochet unicorn. I’ve never used either. - Flo Howard