One team relocate to Dublin's Marlin hotel; another bring their offshoot into the fold 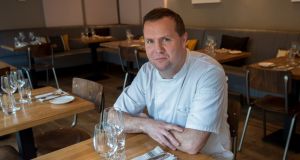 Canteen Celbridge: James Sheridan at the Co Kildare restaurant that he ran for five years with his wife, Soizic Humbert. Photograph: Brenda Fitzsimons

James Sheridan and Soizic Humbert’s Canteen Celbridge, a French-influenced restaurant on the Co Kildare town’s main street, has closed and will reopen in April on the ground floor of the Marlin, a 300-bed hotel adjacent to the St Stephen's Green Cente in Dublin 2.

In Midleton, Co Cork, Kevin and Réidín Aherne are amalgamating their Sage restaurant and its more casual offshoot, the Greenroom, to create Sage 2.0, an all-day dining venue that will open from 8am to 10pm.

Sheridan and Humbert were approached late last year by the management team at the newly opened hotel with an option to open a restaurant on the ground floor, serving the classical food they offered in Celbridge and, before that, at Canteen @ the Market, in Blackrock, Co Dublin.

As the couple are expecting their second child in May, they have decided to close the Celbridge restaurant, after five years, to allow Humbert to stand back from the business, where she ran front of house. The new Dublin opening, which Sheridan will oversee as head chef, will be similar in concept, and the Canteen name will be retained.

The couple are in advanced negotiations to sell the lease, fixtures and fittings at the Celbridge premises. In the meantime, Nathan Dimond, former head chef at Cliff at Lyons, and his fellow chef Caomhán de Brí, have taken it over in the short term to run a pop-up, Ginger’s BBQ, which opens on Thursday, March 5th.

Kevin and Réidín Aherne will close Sage and the Greenroom on April 4th, reopening as Sage 2.0 six days later. The new venture will continue Sage’s ethos of sourcing ingredients within a 20km radius where possible but will “move away from the fine-dining experience”.

Local meat and fish will be cooked on a chargrill, there will be a daily choice of roasts, and the menu will feature expanded vegan, vegetarian and gluten-free choices.

“Great cooking does not need to mean fine dining,” Kevin Aherne says. “I’m really looking forward to bringing people great food that they can enjoy every day without the fuss of the fine-dining experience. A proper neighbourhood restaurant is what Réidín and I have always wanted.”

The couple say their new business will prioritise “inclusivity, fun and affordability” and will be a “buzzing venue with good tunes, great food and people enjoying themselves, not just enjoying the food.”

The couple say the changes they are making to the business they have run for 12 years will allow it to evolve to reflect changing eating habits. “Sage has very much been about the chef giving people the food he wanted to create. Sage 2.0 will bring food that everyone enjoys to the table.”

The new offering at the former Canteen Celbridge premises is also more midmarket. Ginger’s BBQ will offer slow-cooked Irish beef and pork, chicken wings, a daily fish special, salads and a choice of seven hot sandwiches. “Even the vegan ones will be ‘meaty’,” says Dimond. Black Angus rump cap will be slow-cooked for 16 hours, and TJ Crowe pork belly on the bone will get eight hours.

Dimond is using the four-week pop-up to garner feedback for the concept, which he has previously rolled out for corporate and post-wedding parties at Cliff at Lyons. “Every time I’ve cooked this food, people have loved it. I’ve been talking about doing this forever. It’s about my love of meat, and it makes me really happy,” Dimond says. Ginger’s BBQ will open for lunch Wednesday to Sunday and for dinner Thursday to Saturday.