Restaurant review: Woodruff has spades of ambition and makes the most of its space 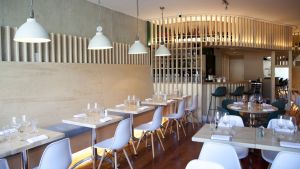 Ambitions come in different shapes and sizes. There’s the tiny unit in Blackrock Market that became Damien Grey’s Michelin-starred restaurant Liath. And there’s the ground floor unit on a hill in Stepaside that was Eamonn O’Reilly’s Box Tree restaurant before he focused on The Greenhouse, where chef Mickael Viljanen landed two stars.

The Box Tree was big, a bar and restaurant with separate entrances in a boomtime building in Stepaside, one of Ireland’s most aptly named villages. Stepaside folks' cars are still flowing through this tributary even as the N11 chokes up with the bulk of the flow.

The old Box Tree has been boxed up into smaller places. One of them is Woodruff and we’re here for an ambitious brunch. It’s ambition on two fronts. There’s our attempt to carve some face-to-face interaction out of a segment of weekend deemed peak-screen. The parents proclaiming “let’s all go for brunch together” is not the stuff of young dreams of a Sunday morning. The salt and pepper shakers are lightly distressed, someone notices. A bit like the teenagers, I note, a jibe not even worthy of an eye roll.

Woodruff has spades of food ambition. They make their own sourdough bread and churn their own butter. These are two starting points marking Woodruff as a league apart from the bottled eggs and buckets of mayonnaise brunch chancers.

In Woodruff they do a one-for-everyone-in-the-audience kind of brunch. There are some of the classics, as breakfasty as the Morning Ireland jingle

The name comes from the humble wild plant that loves beech woods. Woodruff leaves grow like ruffs up the stem and in summer it’s topped off with tiny white four petalled flowers. The magic of woodruff is when it dries it smells like newly mown hay, a scent that transfers to liquid, making it a favourite ingredient in things such as woodruff cream.

The restaurant makes the most of its space, decked out like a Scandi-inspired coffee shop, all white bucket chairs, creamy pale ply, with nifty dowels in between the planks for hanging things. We have the snug, a curved corner end which wraps around us snugly so we feel like pencils in a pencil case.

After a wait, the food arrives and contentment settles like a mist. There is talk of what defines a brunch, whether it is time of day or type of food. In Woodruff they do a one-for-everyone-in-the-audience kind of brunch.

There are some of the classics, as breakfasty as the Morning Ireland jingle. A full Irish is a generous plate of pig, fudgy black pudding and a mushroom the size of a saucer fried in butter till it’s mahogany brown. There is a stack of fluffy sweet buttermilk pancakes with cream and juicy berries. The Foods of Athenry granola (gluten-free) is teamed with Velvet Cloud yoghurt, which is a step up from the usual.

There are dishes here that also appear on the lunch and dinner menu and mine is a portion of white pollock which exceeds expectations. The marble-white fish has been cooked so brilliantly that the skin has turned crisp but the fish is still delicate and juicy. There are pillowy seaweed gnocchi, boiled and then finished on a pan, slippery baby leeks like the ones I just bought at a farmers’ market and cubes of celeriac, also in season now. It’s all brought together with a delicate buttery bisque containing sweet lovely mussels.

Liam has the Scotch egg, another seemingly simple but brilliantly executed dish. Andarl pork meat wraps around a still gooey egg and it’s all cloaked in crisp panko. There’s a celeriac remoulade laced with popping fiery mustard seeds and batons of crisp Granny Smith and radicchio to add sweet and bitter to the full range of flavours. The golden crisp chips are excellent and a kimchi mayonnaise almost froths with life and deliciousness.

We share a crème brûlée whose top is more toffee apple than glassy crisp, but still good. There’s a doorstep round of shortbread that looks like a batch made at home with a glass improvised as the cookie cutter.

This far from the magnetic pull of the city centre, a restaurant has to be casual and neighbourhoody, but I sense an ambition to put Woodruff on the map for a wider audience. They deserve it. Put it on your radar. The village’s Garda station may be under a cloud, given the ousting of its political champion, but Stepaside just got itself an excellent restaurant.

Brunch for five, with drinks, tea, coffees and shared dessert, came to €80.50.