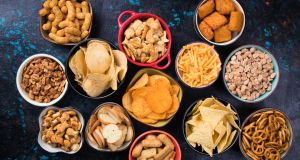 Scientists are split on how often we should eat. Personally, I always have food in my pockets – fine when it’s rice cakes, less so when it’s cheese.

The jury keeps coming in and then going back out again on the topic of meal frequency. One study will find that, compared with those having three meals, 17-a-day snackers have a better metabolic profile and lower cholesterol. The next will find that spreading your calorie intake over more meals does not aid weight loss. Then someone will break the mould altogether and suggest that the correct number of meals is neither three nor 17, but two – in one study, people with type 2 diabetes who ate only breakfast and lunch, compared with six meals a day, saw their BMI fall further. At this point, science is just being vexatious: you can read this only as a coded message to make up your own mind and do what you like.

My pockets are always full of random food, which is fine when it is a rice cake, but not when it is cheese

That is what I have always done – what I like. There is some method behind it: I suspect rigid three-meal-a-day people of secretly enjoying the thrill of being hungry. There is something performative in their self-denial. I don’t know why this annoys me as much as it does, but it has resulted in me eating a lot of pork scratchings. Fasting, which is popular at the moment, suggests leaving a gap of some kind between one food adventure and the next, but I am not sure that eschewing food for as few as four or six hours counts as a fast.

There is a critical problem with variety. Cooking dinner is an undertaking, if only a 20-minute one. Even if we make the same things repeatedly, everyone does some basic cabin checks (in this analogy, the cabin is your stomach): did I have sausages last night? When did I last have a green vegetable? Is there more to life than pasta? It would defeat the object of a snack if you thought about it for even 20 seconds, so you always end up having the same thing. It is almost never an apple. It tends to be made of carbs, as they are the most portable. Let’s just admit it: it is always crisps. The furthest concession to health I will make is a sour cream and chive lentil twist – and that is a vanishingly rare event. It is so often a Pringle that I think I am Martha Stewart when I remember to buy Popchips. I have created such a strong crisp norm that anything not-crisps is considered a health food, even when it is a hash brown.

Sweets fit uncomfortably into the snack arc, since they are obviously a treat, yet at the same time they are the size of a snack. So I have moulded what should be a big-ticket sugar item into yet another miniature in the minibar of snack life.

People who snack never finish a full meal, which is annoying when you have cooked that meal, but not as bad as the ascent into adulthood, when you still snack constantly, but discover you can also manage a full meal. The only food you can eat constantly without ill effect is hay – and even then only if you are a rabbit.

My pockets are always full of random food, which is fine when it is a rice cake, but not when it is cheese. A huge amount of plastic goes into the process of separating foods into snack sizes, which then ends up in my pocket as well. I walk around making a crinkling noise, as if I am wearing a cheap clown costume.

Just as you would never put your whole mind to choosing a snack, so no one ever concentrates on eating one. This lowers the ceiling of eating pleasure – although I wonder how high that ceiling is in the first place when you are talking about a Pringle – and means that you eat too fast. There was a huge movement in the early 00s around chewing every mouthful 32 times (when I say “huge movement”, I mean “two articles”); this has ancient digestive benefits, its proponents said, breaking down the food so thoroughly at the start of its journey that the rest of your tract didn’t have to work so hard. It didn’t catch on, because it was boring and a bit bovine, but the space between 32 times and “inhaling your food while doing something else” is probably the one we should inhabit.

There are times when we go paleo, but without the raw meat – technically, this makes it a pre-paleo diet – and live on nuts and berries, with the odd edamame bean. This feels great for the 15 minutes that it lasts. Overall, snacking is the most disruptive domestic issue I have encountered – and I am divorced. – Guardian