Chef to open ‘simpler’ bar and restaurant in Temple Bar 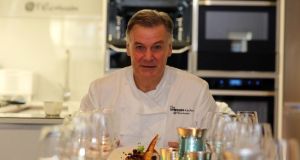 Derry and Sallyanne Clarke will close the Michelin-starred restaurant L’Ecrivain at the end of July. Photograph: Nick Bradshaw

L’Ecrivain, the Michelin-starred Dublin city centre restaurant, is to close at the end of July after more than 30 years in business. Derry and Sallyanne Clarke opened the restaurant in July 1989 and it has held a Michelin star since 2003.

“We want to leave with heads held high and with a successful business, which it still is. We are a long time at it and it’s time for a change,” Derry Clarke said.

The restaurant, which employs around 30 people, will be offered for sale, and Clarke plans to open a more casual bar and restaurant in Temple Bar, near the Millennium Bridge in the city centre, in the autumn.

“We wanted to leave with a bit of style and do it properly, unlike other restaurants that close overnight. There is always a time for everything in life. We are very proud of our time in business and we feel that the time is right to end on a high while the business is still relevant and successful,” he said. “We also wanted to give staff good notice – hopefully some of them will come with me to Temple Bar – and also for those with vouchers for the restaurant.”

The hospitality guide, Ireland’s Blue Book, describes L’Ecrivain as “an award-winning restaurant that has built itself a reputation for innovative cooking Irish/French style, using the very best of seasonal Irish produce from small indigenous producers”.

The current 2020 edition of the Michelin Guide credits L’Ecrivain, which is located in a courtyard setting in a Georgian mews off Baggot Street in Dublin 2, as being “a cornerstone of the Irish gastronomic scene for 30 years”. The menus offer “a good range of modern dishes which have a hint of the adventurous underpinned by a solid classical base”.

Speaking to the Irish Times in 2016, Clarke said he had a plan in place if the restaurant were ever to lost its star. “I’d have to change the restaurant, change everything around. I wouldn’t have as many staff, simpler food, less courses, that kind of stuff.”

Plans are at an advanced stage for this as yet unnamed business, which Clarke expects to open in September or October. It will serve simpler food than L’Ecrivain’s French classical cuisine, in what he describes as “a cool space”.

In recent times Clarke has voiced concern at the number of new restaurants opening in the capital. “Every time a retail outlet closes a food operation opens in that premises. Look at Ranelagh, Camden Street, George’s Street, Dame Street, Dawson Street. I could go on. I think Dublin City Council don’t care once the very high rates and water charges are paid.”

Always a popular choice for corporate entertaining, L’Ecrivain weathered the recession by a offering value deals and embarking on cost cutting. “It was very difficult... we didn’t make anybody redundant. We took the biggest cut, myself and Sallyanne. We did have investments here and there, money put aside, and we used that as back up, to keep things going, and still do,” he told The Irish Times in 2012.

In recent years the couple have developed media careers while also running their restaurant. Derry Clarke is a regular contributor to the Six O’Clock Show on Virgin Media TV as well as co-presenting the RTÉ television series Lords and Ladles alongside Paul Flynn and Catherine Fulvio. Sallyanne Clarke, who was front of house at L’Ecrivain, intends to take on consultancy roles and expand her work on radio and television. She is a regular panellist on the Elaine show on Virgin Media TV.

The couple said they have not taken the decision to close lightly. “It has been hard work over the years but we have loved every minute of it. We are delighted with all the friends we have made over the years. We have had some really fun times and many memorable occasions celebrated in L’Ecrivain.”