Two easy pasta dishes this week, as well as one deep, delicious starter 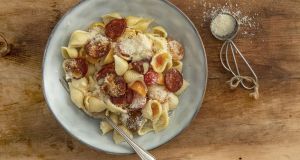 I’m writing this at 11am on a Tuesday morning, in the cinema. It’s cold and rainy outside and is busier than usual. I was hoping to see Guy Richie’s latest cockney blokefest but it wasn’t on. Instead I’m at Little Women. I’m the only man here and I’m also the youngest by a distance. I shouldn’t be on my phone of course, but I’m secreted in the uppermost dark corner so hopefully I won’t be detected.

Today I’m in the mood for Italian food. In our cookery school the Italian courses can be bigger than a gondolier’s bank account; everyone loves them.

We’ve been to Italy many times, most recently to Umbria; its quiet, rolling hills were perfect when the girls were younger. We could rent a stylish apartment with our own pool for much less than in its brasher neighbour Tuscany, and I would spend my days exploring and food shopping while they were all in the pool. The evenings were spent quietly cooking, listening to my beloved JBL speaker and exploring the wines of the region.

There is an unending amount of exploring to be done in Italy. Last year I was brought on a trip with a couple of other chefs, a dangerous proposition if you know what chefs are like. We flew into Innsbruck at night then travelled south to the Italian Dolomites to attend a conference about cheffy stuff and ski. I can’t ski, so they put me on a grandad's pony and trap. My blushes nearly melted the snow.

Thunderstruck by the beauty of the region, we discovered Ladin, an Italian-German series of valleys with its own proud, prosperous culture, food and language.

I’ve two pasta dishes to share this week, and one deep and delicious starter. The orecchiette is something we do at home regularly. It’s perfect for the teenage cook to make, and you might have one or more of those hanging around the house this mid-term.

The cheat’s ravioli makes fabulous use of Chinese wanton pastry (for those not inclined to make their own pasta), which is found in the freezers at Asian shops. A simple goats’ cheese filling and a nutty butter sauce is all that’s needed to turn this into a great dinner.

Finally, an Italian-inspired starter or light lunch where mozzarella is given depth and dignity by sticky, smokey aubergine and an artfully applied slice of Parma ham.

1 Cook the garlic, chorizo and rosemary gently in the olive oil for 3-4 minutes until the oil secretes from the chorizo and the garlic turns gently golden.

2 Remove from the heat, remove the rosemary and add the tomatoes and olives. This can all be done ahead of time.

3 Cook the pasta as per packet instructions.

4 Bring the chorizo mix up to a simmer.

5 Drain the pasta, reserving a half cup of cooking water. Stir this through the pasta, along with the cream and the chorizo mixture. Season with salt and pepper.

6 Divide into warm bowls and sprinkle the grated Parmesan over the top.

1 Gently heat the olive oil over a medium heat.

2 Add the peppers, aubergine and garlic. Turn well in the oil and when sizzling turn down low.

3 Cover with a lid and cook for 20 minutes, turning once or twice.

4 Add the vinegar, sugar and smoked paprika and rosemary. Cover with the lid and cook on a low heat for a further 20 minutes, checking it from time to time.

5 When all the vinegar has evaporated and the mixture is jammy, remove the rosemary, add the clementine juice, salt and pepper.

6 Remove from the heat and reserve. This will keep in the fridge for up to three days (it’s also great folded through pasta).

7 Serve warm or at room temperature with the mozzarella on top and the Parma ham artfully wrapped around it.

2 Mash the goats’ cheese with the egg yolk and black pepper.

3 Line up four wrappers at a time and place a teaspoon of cheese mixture in the middle of each – it’s very important not to overfill them.

4 Lightly brush the edges of the wontons with the egg wash. Fold the wontons to form a sealed triangle and press firmly to make sure there are no air pockets.

5 Place on a tray in the fridge on some greaseproof paper – leaving space between each so they don’t stick.

6 To make the sauce, put the butter into a pan over a medium heat and allow it to bubble and foam. When the butter starts to turn golden brown around the edges, swirl to mix, then carefully observe it – you want a light hazelnut colour.

7 Add the sage leaves, cook for 30 seconds to allow them to crisp a little, then add the lemon juice. Your sauce is now ready. This can be done ahead of time.

8 To serve, place the ravioli into a pot of simmering salted water. They will rise to the top after two minutes. Separate them gently and cook for one more minute.

9 Lift them out with a slotted spoon removing all the excess water and place onto warm plates.

10 Spoon the sauce on top, making sure you have stirred it well. Sprinkle generously with Parmesan.