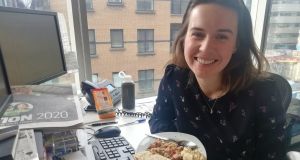 Hey meat, it’s me, Niamh. Look, I know we said this was just a break – but the thing is, I’ve met someone else. He’s called vegetables.

When I started this meat-free experiment seven weeks ago I never could have foreseen it lasting past the time required.

I had no intention of giving up meat in the long term, and my first couple of weeks left me dazed and disorientated in the kitchen.

I didn’t know how to start making a meal without fish or meat, I feared overcompensating with bread or spuds, and I felt my world had gotten narrower.

As it transpired, the opposite happened.

I was surviving off beans on toast and omelettes for the first while, dreaming about what I would eat on that fateful day: February 10th.

Would there be a celebratory Bunsen burger for dinner, or maybe a chicken fillet roll for lunch?

As it turned out I was working in the newsroom into the small hours of February 10th as part of the Election 2020 coverage – at which there would be pizza.

When the clock struck midnight, the first bit of meat to pass my lips in six weeks (apart from that accidental ham sandwich) was a cold, knobbly slice of pepperoni. Underwhelming to say the least.

I didn’t go near it again until the middle of the week, when my housemate had cooked chicken fajitas for dinner. I ate them because I was hungry, but wouldn’t have been compelled to cook it myself.

In fact, when I had the kitchen to myself I chose to cook the vegetarian meals I grew to love over these last six weeks: sweet potato and butterbean stew, kidney bean chilli, butternut squash soup and goat’s cheese salad.

I have relished being able to eat cheese and yoghurt again, having never fully embraced the vegan way of life.

Yet I feel a little queasy with all the milk I realise I’ve been drinking. I have stuck to my hazelnut milk overnight oats because I simply feel better for not having a pint of real milk in the morning; though I delight at having it back in my tea.

I look at all the vegetarian cookbooks I’ve accumulated with a new sense of excitement. It no longer feels limiting, but actually quite the opposite.

I have started the Happy Pear’s vegan cooking course, wondering why I didn’t do it sooner. Its straightforward recipes have been a constant support throughout this, always there a resource when I’m scratching my head at the aubergines and lentils, wondering what can I make that doesn’t involve curry powder?

Going vegetarian for a substantial amount of time has opened a whole new culinary world for me, one in which I can create utterly different meals to those I had relied on before.

When I think about making a salad now I don’t just assume I need some limp bunch of leaves and a poor appetite. I am excited by the couscous and pomegranate, the balsamic broccoli and the Asian slaw.

I would love to get to a stage where I had a few bowls of these in the fridge to dip in and out of for lunch, or small dinners.

But don’t get me wrong – I’m not Gweneth Paltrow now.

I ordered chicken wings when I was out, thinking it would be normal again – but I felt pretty sluggish after.

My dad made a delicious roast chicken dinner at the weekend, which I mopped up, and I cooked salmon for a quick midweek meal, both of which I really enjoyed.

I have started buying meat again in the weekly shop too, though only small amounts of good quality stuff and mostly to keep my housemates happy.

My stomach turns a little at the sight of massive packets of chicken fillets, and I am happy to stick to the Linda McCartney burgers instead of minced beef.

I never thought this would be the outcome when I faced into this challenge.

I wrote about the importance of meat production to my rearing, both in a dietary sense and an economic one too. Beef and dairy farming is what sustains rural Ireland, and I feared this column might contribute to challenges it was already facing.

I do intend to go back eating meat, just not as much of it as I was before, and mostly when I’m not at home or am in a restaurant.

When I do buy meat and fish I intend to do so mindfully, seeking out local butchers and fishmongers, noting the suppliers of supermarkets and buying organic when I can.

I was taken aback by the distances my tins of beans and chickpeas had travelled to get to my cupboards, or the amount of water it took to produce my litre of almond milk. It would seem to me to be completely counterproductive to rely on these rather than the meat, dairy and vegetables we produce on this island.

I will go for the Bunsen burger again, and I’ll never turn down a roast in Roscommon.

But my days of eating meat at every meal are over.

Looking for a nifty home-working desk? This Irish designer model could solve your problems
9