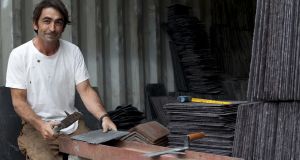 Ed Hammond of Slated at work

“Hammonds have been making slates for generations,” says Tara Hammond. “A complete lack of imagination!” she continues, laughing. “If you look up the census, all the Hammonds are listed in Dalkey as slaters – apart from one or two rogue fishermen.” Back in the day it was all about roofing, and while Tara might laugh about the imagination, or lack thereof, they were highly skilled master craftsmen, with techniques passed from father to son.

In 2010, Tara and her husband Ed adapted the tradition, by turning Ed’s talents to making slate homewares. Now their Slated range features tableware, candle holders and personalised gifts – including a new board, which, Tara says, “is just the right size for all your gin things”.

Ed uses a particular knife to create these pieces. It has a long, dropped blade, with a special pick sticking out, and a short wooden handle, bounded in bronze. It was given to him by his father, who had said: “That’s your grandfather James’s knife.” “There was a serious amount of boys in the family,” says Tara. “So there would have been a lot of knives, but this is the only one left.”

It is a lovely connection to the past, and recently that connection deepened, when James McCann contacted the Hammonds, looking for gifts for his PR agency, ClearStory International. They got talking, and McCann said: “Do you think we could be related?” McCann had been researching his own family tree, and had uncovered the Hammonds and their slating ways.

To cut a long story short, McCann and the Hammonds were indeed related, and so Ed began the commission, using a knife once owned by their shared great-great-grandfather. “We have met the new cousin – from a distance of course,” says Tara. “We’ve had a great chat, and even met his mum.”

“The knife brings thoughts and memories from that passage of time,” continues Ed. “My family’s hands it has passed through, and how we are still keeping my family’s craft alive . . .”

While it doesn’t look terribly sharp, the knife is a serious implement. Slate itself can blunt knives so, while it is brilliant for platters and cheeseboards, and as a fancy alternative to plates, it’s not the ideal choice for a chopping board. “The funny thing,” says Tara, “is the knife self-sharpens. If you feel it, it’s quite blunt, but it works as well as it ever has. We mark out the slate and scrape the shape we want, then you pick along that. The slate breaks away, and you smooth it off.”

The surface of the slate is important. You’re looking for a smoothness, but with texture. Sometimes you also get lucky and find the glitter of “fool’s gold”. Another Slated favourite are the candle holders, where copper is included. “Copper and slate would have been used together on roofs. That’s how we like to pick our materials. It gives a lovely glow to the candles.” But how do you prevent the copper from tarnishing? “Ketchup,” says Tara. “Clean it with ketchup. Nothing else works like it.”

The Slated range starts at €10 for an alphabet coaster. slated.ie