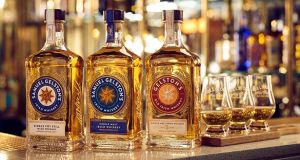 Gelston’s Old Irish Whiskey has been operating under the radar for a couple of years, but is now ready to expand its customer base. The man behind Gelston’s is Johnny Neill. As well as being a great-great-grandson of the original Neill who bought Gelston’s from founder Samuel Gelston in 1869, Neill is descended on his mother’s side from the family that owned Greenall’s Gin. Booze really does flow in his veins. In 2005, he set up Whitney Neill, one of the early craft gin distilleries in the UK, now owned by drinks company Halewood.

“I always knew the family had something to do with whiskey and began investigating back in 2007,” Neill says. “But it didn’t come to fruition until five years ago. Harry Neill worked as a clerk in Ulster Bank. He emigrated to Melbourne during the 1851 gold rush and set up a shop selling provisions. He made a lot of money, and then sold his share to his brothers, including Percival Neill, before returning to Belfast. In 1861 he bought Gelston’s from the widow of Samuel Gelston. Harry died in 1891, but the family continued the business until the late 1920s.”

Neill re-registered the name. “When I got Halewood on board, I was able to buy some casks of old Bushmills whiskey through John Teeling. These were original single malts that had lain untouched since 1991, plus some 2001 and 2003. We were able to launch a 25-year-old whiskey here, in the US and Japan.”

Like the original Gelston’s, they now source whiskey from other distilleries, primarily West Cork Distillery, and create their own blends. There is a full range available.

In a neat coincidence, the latest release, the Single Pot Still Pinot Noir Finish, was aged for 21 months in casks supplied by his cousin, the actor Sam Neill, a descendent of Percival, who has a successful winery in Central Otago, New Zealand. The whiskey, full of sweet ripe red fruits, is available for €44.99 from specialist spirit retailers, including online.