Chow down: Pets are now legally allowed in restaurants, but are they welcome?

After the rules change on pets in restaurants and pubs, some tips to keep them under control, and not to distract working dogs 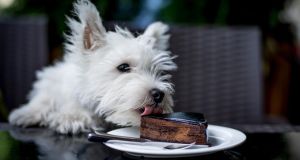 Dogs and cats may be allowed in some restaurants and bars since the rules changed in November 2017, but not many of them are encouraging it, and owners and their pets are cautioned about manners to handle these new social situations.

Where pets are allowed inside, Irish Guide Dogs (IDG) has drawn on years of experience of successfully having dogs in public premises, and offers some tips for handling your mutt or your moggie while you’re munching, particularly when there is a working dog nearby.

Until November 2017, café and restaurant owners were prohibited from allowing pets indoors, with the exception of guide dogs and special needs companion dogs, which have always been welcome.

The 1950s law about domestic animals (dogs and cats) in food premises was repealed late last year so domestic pets may be allowed in bars and restaurants (but not where food is prepared, handled or stored – so not in kitchens or food shops).

Guide, assistance and companion dogs (and pups in training) have always been exempt from the rules as they are working animals for blind and vision impaired, and for those with autism. They are highly trained and disciplined animals. Allowing pets inside is not obligatory, and is at the discretion of the property owner, who may have to balance competing wishes, and implications for public liability. The Restaurants Association of Ireland says it hasn’t had much feedback or interest from members since the rules relaxed – which is borne out by our casual survey below – so people are advised to check before bringing their dog for lunch.

The Restaurants Association doesn’t report much interest from businesses in having pets onboard. It has advised members to be conscious of the risks of cross-contamination, and suggested restaurants check their insurance about the implications for public liability. For example, if a restaurant chooses to allow pets, it needs to know where liability falls if an animal bites a customer on the premises; there’s also the issue of allergic reactions, it points out. “It’s a fine balancing act,” said a spokeswoman.

Dog-friendly restaurant Pupp, on Clanbrassil St Lower in Dublin 8, was to the fore in lobbying for the rule change but, in a twist of fate, it closed in December, two-and-a-half years after opening and just after the relaxation was announced. The restaurant also sold luxury dog accessories and had a “Doggy Menu”.

In announcing its closure, Pupp said it was “incredibly proud” it had driven progress towards its goal “to make Ireland more dog-friendly”. It said there are now over 20 dog-friendly food businesses in Dublin and Pupp’s business-to-business Dog-Friendly Association of Ireland, to help companies become dog-friendly, has more than 100 members.

A number of places, such as MVP, a pub that serves cocktails and baked potatoes on Clanbrassil Street, market themselves as dog friendly. Outlets that specifically welcome pets figure on sites such as packthepooch.com and bringfido.com, but it seems many other places that serve food and drink have not considered allowing pets.

On a random ring-around to check whether businesses that serve food or drink have changed policy since the rules relaxed to allow domestic pets, it’s difficult to discern if anything has changed. Most are surprised to be asked and say it doesn’t arise.

James Ure, manager in Gallaher and Co bistro on D’Olier St, Dublin says it won’t be allowing pets on the premises. Space is tight, and they would have concerns “from a behaviour point of view”. He observes that he’s been to places where pets were “no bother”, but he’s doubtful. “You have to take each person on their word.”

Bar Italia on Lower Ormond Quay is surprised at the request about pets. “You find me unprepared. In four years working here nobody has asked” to bring a pet in, though sometimes people having a coffee at an outside table may have a dog, they say.

At Costa coffee on College Green they’re also surprised at the question, say dogs never come in, and suggest checking with head office (there was no response at time of going to press).

Brother Hubbard South café, on Harrington Street, currently allows pets in its separate outdoor terrace which has plenty of space. Martha Elizondo says its Capel Street cafe is opening a new outdoor terrace this spring, and they “will consider our pets policy when that happens. Despite the fact that we have two dogs and are dog lovers, we need to consider what is best suited for all of our customers.” She will be looking for legal guidance about “detailed health and safety considerations - not just hygiene, but also other factors which could affect health and safety as a result of having pets on the premises”.

Michelin Star restaurant Chapter One on Parnell Square doesn’t have a rule about pets and hasn’t had requests for them to come in. “We have yet to cross that bridge,” said reservations manager Sharon Shevlin. They would consider it when the time comes, “when someone wants to bring their goldfish in”, she joked. “We’re pretty easy going up here on the northside, but we’re not advertising for people bring their pets.” Guide dogs are regularly in the restaurant, she observes, and are very well behaved, she said, but otherwise, “I can’t see it, really”.

Irish Guide Dogs says it supports the change in law. Spokeswoman Lean Kennedy says “Guide dogs and assistance dogs are highly trained, reliable and sociable working animals. They undergo two years of training before they qualify as a guide dog or assistance dog. A key feature of the training is how to behave in public places, such as food businesses, coffee shops and restaurants. Essentially, the Guide dog or Assistance dog lies quietly alongside its owner’s feet, at all times on a lead, not pestering other customers. From a young age our puppies visit public places for socialisation in preparation for their future role as a guide or assistance dog.”

IGD decided to share what it has learned with pet owners who may now be able to bring domestic pets into some bars and restaurants. Kennedy stressed the importance of pet owners being aware when a guide or assistance dog is working near them and their pet. “We would like to share some nuggets of information we have gathered in how best to ensure pets are well-behaved and sociable in food businesses.”

Irish Guide Dogs’ suggestions for visiting a food business where the owner consents to pets.

3. Encourage your pet to sit alongside your feet or under the dining table. It is important your pet does not block the way.

4. It may be beneficial for you to carry some of your dog’s food, generally dog food nuts, as a real reward for your domestic animal when visiting food businesses.

5. If you have a small domestic pet you may consider picking it up and carrying it in your arms when passing by someone with a guide dog or assistance dog.