Ready to order, ladies? A new old-fashioned spot in Monkstown 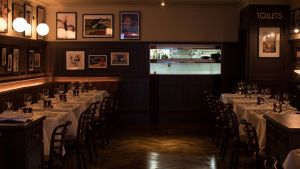 Like much of life food is made of decisive moments. We decide how to source, season, cook and serve dinner. Good chefs are good decision makers. The “decisive moment” was French photographer Henri Cartier-Bresson’s credo. It was the point at which he captured a fleeting arrangement of light making sense or beauty (or both) of the chaos of being alive.

Cartier-Bresson was the co-founder of the Magnum agency and is a big name to street photographers. The generation before the lens swivel button took cameras out of studios to document the lives of others. Bresson is the name of Monkstown’s newest restaurant. It’s named after Cartier-Bresson. Except they’ve dropped the first half of the photographer’s double barrel. Probably the French man wouldn’t have minded. He famously loved being the gaze rather than the subject.

So Bresson the restaurant is French. Not Hiberno-Scandi-Italiany with a scattering of pomegranate seeds on top like much else on the restaurant scene these days. It’s in Monkstown Crescent in the former Seapoint Fish and Grill. Seapoint opened nearly a decade ago as business on the crescent ebbed and flowed until it became the restaurant strip it is today.

Bresson is a partnership between chef Temple Garner and manager Conor Kavanagh. Garner made his name in the boomtime restaurant Town Bar and Grill before setting up San Lorenzos on South Great George’s St. Kavanagh comes from the rugby fan’s favourite gastropub The Old Spot in Ringsend.

Bresson is a step into posher territory for both men. Waiters wear crisp white aprons over their black trousers. They call us “ladies” and swoop on casually abandoned napkins like attack drones on a mission to fold. The tables are draped in linens and the cutlery has the heft of the stuff that came out of red velvet slots in the canteen of wedding cutlery. You don’t so much need Google maps to get here as a time machine. There is a bar down one end and the kitchen down the other. Tables are arrayed along two walls against chocolate-coloured panelling. Instead of photographs the walls are covered in twentieth century advertising art.

The era feels more like London in the 1990s than Paris in the 1960s. And the menu has one dish that’s familiar from somewhere closer to home. Crab creme brulee is a Paul Flynn dish from the Tannery in Dungarvan. He was inspired by a recipe for Mrs Beeton’s potted crab. Young Mrs B (she died at the age of 28) was a card-carrying magpie of other peoples’ ideas and now it’s here in Monkstown with its pickled cucumber sidekick and a new crisp lid of grated cheese.

It comes with just the right amount of melba toasts, and is a deft and delicious working of a favourite, although the cucumber could do with being sliced into thinner silkier rounds. Across the table there’s a large bowl of bouillabaisse, with a cracker side of crab mayo on melba toast. The soup is a saffrony bisque the colour of brown brick with flavour clout enough to be enjoyed on its own. Then they add chunks of everything that’s good from the sea, including curls of scored squid and the star ingredient: palourde clams, creamy meaty chewy little critters in their roomy shells.

Applying French techniques to Irish ingredients is the main schtick here, they say, but tonight the fish is French too, wild seabass from Brittany. It’s a gorgeous fillet of luscious fish as white as the table linen topped with a shimmering mesh of crisp skin. There’s a gnarly just scorched baby squid whose tentacles taste of summer barbecue season. A wedge of fennel has been confited so it’s got all the brightness of its raw flavour in a softer texture. A Pernod and chervil butter has been made with a light hand so you’re not beaten into submission with aniseed. The loveliest bites of all are the shiny yellow skin-on ratte potatoes, waxy fingerling specimens with that nutty new potato taste of my Dad’s home grown spuds that I only find once every few years in a restaurant potato.

Jeanne has the Kilkeel scallops, which come nestled into creamy potato puree that’s been laced with smoked haddock and brown shrimp and piped into scallop shells. Crisp well cooked chips come in a copper pot. There’s a sticky tarte tatin to finish, a round of house pastry that’s dense and buttery in all the right ways. The chunks of golden brown apple have the nearly-toffee finish that comes from being cooked for just the right amount of time.

By the end we’ve agreed a verdict on Bresson’s identity. It’s “French like Perrier as opposed to French like that bread they make in Spar,” as my friend says. Reinventions of the old world can set your teeth on edge or feel like a respite from all the forward momentum. One woman’s set of dusty dining tropes is another’s relaxing night out. Bresson frames a moment in food and manages to stay just the right side of timelessness. It’s a trick of the light that takes talent in the kitchen and lots of good decisions along the way.

Dinner for two with a glass of wine, two bottles of sparkling water and a shared dessert came to €110.75.

Facilities: Marbled to the hilt but slightly chilly

Vegetarian options: Only one per course. I’d like to see more reach here