This place is young but fully formed, with ambition and elbow room 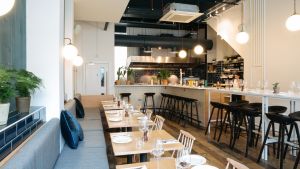 “It’s the New Ranelagh” is the war cry for anywhere with a half-decent coffee shop these days. But with all these new Ranelaghs I wonder how the old one is doing. The south Dublin village of Ranelagh, or Rhenelagh (as true Rhenelonians call it), was my bedsit land. I lived in a room with a two-bar fire, a urine-scented carpet, a cupboard-sized kitchen and a bathroom a flight of stairs down. My mother tied a climbing rope around the leg of my bed, for an escape out the first- floor window in case of fire. Grease-laden clouds from the chipper out front wafted in on summer evenings. It was Victorian village living at its most glamorous.

In the intervening decades Ranelagh’s food scene threw off its smelly student dive image. Dylan McGrath brought a star to the village with Mint. Restaurateur John Farrell swept up the pieces post-Mint and refashioned them into Dillingers spawning a new mid-range empire. The scent of money was in the air, wafting from a well-heeled brunch herd in search of a watering hole. And leafy old Ranelagh blossomed into its own restaurant district.

The latest addition is Host. It’s in a former clothes shop near the Luas stop. And we’ve arrived on a Friday evening with some heavy hearts about dining in Dublin after two dire meals. We nearly need to burn some sage to fumigate the bad out of the week but, instead, we’re tucking ourselves into a corner seat in this pleasantly large room and hoping for the best.

They’ve left the battered floorboards in their original state for a shabby chic feel and minimalised everything else, with stark white walls, globe pendant lamps, regular height tables down one long grey upholstered banquette and tall stool tables down the other side. There are stools at the window too.

There’s a Blair Witch Project does Valentines bunch of desiccated roses hung individually head down as decoration on one wall. The softening touches come in the shape of candles and real plants, nice well-cared for feathery ferns.

The young team is dressed in box-fresh white T-shirts and all look like they know what they’re doing without making you feel that you don’t. The short menu folds into a bookmark sized card. There’s a €35 set menu presented on something just slightly bigger than a business card.

But that’s where the smallness ends. It’s mostly big flavours like the grassy olive oil with a peppery nip to it that comes with a deliciously salty cakey focaccia to keep us happy before the starters arrive. The olive oil comes in handy as an addition to my house-cured salmon plate. The “fennel-cured” fish doesn’t taste of fennel but has been deftly sliced into soft petals and finished with rounds of crisp radish and matchsticks of apple. There’s a lovely citrus orange dressing on top but it’s a touch too meek until some salt and that extra olive oil are added. Extra bread for mopping and it’s all good.

The other starter is all about contrasting textures, cloudy puffs of ricotta on crisp toasts with honey puddling in the dimples and wafer thin slices of nicely chewy salami shinier than a bald man after a Bikram class.

The food is mostly Italian, without the pizza and spaghetti. There’s a plate of lamb, luscious and tongue pink in the middle, seared on the outside and sliced thin. It comes with an aubergine that’s had all its stringiness blended into a puree as smooth as face cream and a dollop of creme fraiche pooling in meat juices to cut through the meatiness with a lactic tang.

I get the pumpkin pasta, generous house-made cappellacci (pasta in the shape of hats) which are all softness and sweet squidge. There are crunchy walnuts to swerve it out of the baby food aisle and sage leaves for a herby edge. The pumpkin is so naturally sweet there’s a fleetingly wonderful impression of walnut coffee cake about the whole delicious plate. It’s a veggie option that’s as good if not better than the meal with a face. There’s a side of long-stem broccoli with an anchovy oil and nutty crumb which treat the veg with as much reverence as the meat.

To end a school dinner (in a good way), a slab of warm ginger cake with caramel and mascarpone and a chocolate pot made with sooty satisfying chocolate that has a rosemary crumb on top. I love it but the man who ordered it isn’t fully convinced the meaty herb should be allowed near a dessert.

So lucky old Ranelagh has itself a shiny new star in its neighbourhood restaurant scene. It’s the best of both worlds in several ways. Host is young but fully formed. It has the ambition and reach of a city centre place but the elbow room and comfort of a restaurant beyond the canals. You don’t have to bring your ear trumpet to hear your friends over the shrieking of fellow diners crammed into postage stamp spaces. Faith and hope are restored. It’s the restaurant for which Old Ranelagh has been waiting.

Dinner for two with three glasses of wine, sparkling water, dessert and an espresso came to €94.50.