Cava: The Dublin restaurant with proper Spanish tapas and cava

Food File: Cava on Dublin’s Camden Street has a weekly changing selection of Iberian cheeses and meats, five types of cava by the glass 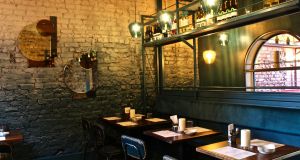 The latest venture from the Port House group, its fifth restaurant and bar, is a 100-seater just opened on Dublin’s Camden Street and specialising in tapas and cava. Port House Cava is open seven days a week, noon-11.30pm (until 1am Fridays and Saturdays) and is geared towards walk-ins, with reservations only for tables of eight or more.

The menu has a big selection of proper Spanish tapas, a weekly changing selection of Iberian cheeses and cured meats, five types of cava by the glass, including the 0% Freixenet, as well as pitchers of sangria and spritzer. The three-storey building has a 35-seat private dining room on the top floor.

The group, which operates four restaurants in Dublin and one in London, has also branched out into wine tours, in conjunction with Capture Travel. The first is bound for Catalonia (March 17th-20th) with Porto to follow (April 21st-24th).

Still looking for somewhere to hold your Christmas party in Dublin? The gorgeous first-floor dining room at Kerala Kitchen on Upper Baggot Street is available for private hire. The room can be reserved for between 25 and 36 guests, and the menus range from canapes (€25 per person), to a three-course option with plenty of choice, including some of the restaurant’s bestsellers such as Kerala coconut chicken, lamb Chettinad and prawn Moilee (€35).

Chapter One restaurant in Dublin celebrated a red-letter day recently when in the space of just 24 hours its owner and chef-patron Ross Lewis was commended by the Chef Network group for his leadership skills; the restaurant was very favourably reviewed by the Washington Post, and was also included in the new World’s 50 Best Discovery listings.

Tom Sietsema, writing a lengthy and glowing review in the Post, said the restaurant “excels at warm reception”, the snacks at the bar “prime us for something special in the chic dining room”, and the team “deliver in spades”.

Which makes it hardly surprising that Chapter One is among the three Dublin restaurants included in 50 Best Discovery, a new initiative from the team behind the World’s 50 Best Restaurants, who describe it as “a global restaurant and bar search engine”. The Dublin entries also include The Greenhouse and Restaurant Patrick Guilbaud, and its creators say the new list includes venues that have received votes from the panel it calls the 50 Best Academy, but just not enough to make the main line-up.

James St and Ox in Belfast; Aniar in Galway, and Ballymaloe House and Ichigo Ichie in Cork also make the list, which is online at theworlds50best.com/discovery and can be searched by city or establishment name.