Canned food, anyone? Why it’s tastier and healthier than you think

‘The canning process preserves nutrients, though vitamins C and B types may be reduced’ 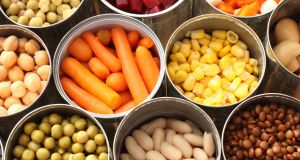 Tinned products are simply just the food cooked in water or a sauce, they won’t have more additives than ready made.

While tinned foods have an old-fashioned image, the expanding canned-food aisles in shops tells us we are buying more. And, with the coronavirus, perhaps it is smart to store some cans in the house.

While tinned food is usually viewed as an addition to a meal – some peas on the side, tuna on a salad – poverty campaigner Jack Monroe’s latest cookbook proves they can go centre stage.

Judging from what’s on offer in the shops, it’s pulses and tinned fish that are selling and less of the Fray Bentos stewed steak, spam and pork luncheon of yesteryear – with reliables such as soup, beans and tinned tomatoes a constant.

The canning process is a bit magic and was invented more than 200 years ago when the French army launched a competition for new ways to preserve food. In 1810 Nicolas Appent developed a method for sealing food in bottles, and boiling its contents at a high heat to effectively sterilise it. This process was then patented using cans by British inventor Peter Durand.

In Ireland, Crosse & Blackwell opened a salmon cannery in Cork in 1849 and Daphne Pochin Mould’s book about the first transatlantic crossing from Cork in 1838 – Capt Roberts of the Sirus – has references to canned foods on board. With improving technology they became a mass market product, with Batchelors setting up in Dublin in 1935.

You don’t have to be much older than 40 for your first taste of pineapple to be out of a tin but now you can get it fresh why would you go for tinned?

I’ve been buying more tinned foods since our freezer broke and in my pantry are peas, lentils (for bolognese and chilli), tinned ratatouille (tasty with pasta), sardines (delicious on sourdough toast with guacamole), chickpeas, mixed beans (for salads), tinned prunes in syrup (heaven with porridge) and from M&S I get sustainable canned wild Alaskan salmon (for fish cakes), butternut-squash soup and tinned mango.

I like the lack of waste – there is none of the inevitable loss that fresh food has between transport, storage and what is thrown out from shops and homes. And, unlike freezing, once it has been canned no more energy is needed to conserve it.

Mindy O’Brien, co-ordinator for the environment group Voice, says steel is efficient as it is reused more than other materials. “The cans used for food are made from steel, which is highly recyclable. Once it has been produced (from iron-ore) it can be used over and over again, with constituents in today’s tins possibly containing elements of cans used in the 1900s,” she says.

O’Brien adds that it takes a small percentage of energy to recycle steel and aluminium, rather than mine a virgin product, so there is an incentive.

And there is nothing wrong healthwise. According to dietitian Gillian McConnell, the nutrient content of canned food is comparable to that of fresh. “Studies show the canning process preserves nutrients, though, as it involves high heat, the water-soluble vitamins C and B types may be reduced. But these are sensitive to heat and air, and the same amount is likely to be lost in the storage and cooking of fresh and frozen versions.”

She advises rinsing pulses before use to remove any extra sodium and says tinned tomatoes and sweetcorn contain more antioxidants and vitamin C than fresh, with canned fish particularly nutritious. “A tin of sardines will supply your entire weekly omega-3 fatty acid needs and most of your daily vitamin D and calcium needs,” she says.

And what about meals in a can? There is a M&S chicken in white sauce that I serve very, very occasionally with couscous and broccoli and the kids love it, but is this a no-go?

“Tinned products are simply just the food cooked in water or a sauce, they won’t have more additives than ready made, and while this meal is probably high in salt, so best not eaten too often, it is a perfectly adequate dinner as an occasional choice and the meat will be quite succulent,” she says.

Jack Monroe recently launched her fifth book last year, Tin, Can, Cook, based on canned ingredients. A quick flick through it will overturn any misconceptions about tins being a bit scout weekendish. Why did she write it?

“A few years ago, I was a single mum on benefits writing a blog about how I was managing to cook. I never forgot how I started out and I wanted to write a book that reflected that – a practical guide to survival, whether Brexit food shortages, or food bank use, or simply an increased cost of living, that restored some dignity and even a little joy to a difficult situation”, she says.

“I have very little time for the notion that some foods are ‘not for poorer people’ – it is a criticism I have come up against time and again. There is a frankly hideous misconception that good food is for the ‘deserving’, with the parameters of who deserves what set by those who have never had a tenner in their pocket to last a week.”

Monroe says the recipe that defines Tin, Can, Cook for her is her canneline beurre blanc, which she describes as “an unctuous and subtly powerful sauce reduced to a thick, provocative shroud for slow-cooked cannellini beans and a scant handful of pasta”.

Her most useful product is tinned tomatoes, and her treat of choice? Tinned peaches straight from the can.

“In this spirit I prepared dinner for my book club. There was butter-bean dip with pitta, roasted cauliflower, red onion and cumin seeds with a can of chickpeas and chilli flakes. Desert was greek yogurt, canned pears, walnuts and maple syrup. The only fresh produce I used was garlic and lemon, cauliflower and onions. It was cheap and quick, with not one murmur of complaint.”