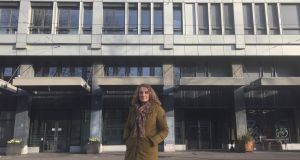 Linda Stewart, originally from Blackrock in Co Dublin, lives in Zurich, where she works for a health-insurance company

I left Ireland in 1988 when I was 20. I had scraped together enough Leaving Certificate points to study something obscure, but had no idea what. In the 1980s unemployment was very high and all I heard was that if you don’t do third-level education, you won’t get anywhere. Having always been horse mad, I knew that getting a qualification with horses was an option so I trained at a yard in Wicklow as a working pupil. The agent who placed me there had customers in Europe looking for Irish staff and that’s how I ended up in Switzerland with a vague idea that I’d be gone for a year or two.

I met my ex-husband when I was thinking it might be time to be going home, but ended up marrying (in Dublin) and that was it. I never went back. His aunt organised a position for me in an office because working nearly 24/7 with horses wasn’t ideal for married life. Initially, I couldn’t even typewrite and my German wasn’t great, but with hard work and training, I made it to where I am now.

Tell us about your work in Zurich

My work involves designing and querying data warehouses in a team providing data for management and input for teams across Switzerland. We’re also required to provide some information to local, cantonal and federal government agencies, and because we’re a leading company we provide statistical data for regulatory purposes. Comprehensive health insurance is obligatory and there are 51 companies offering it with various extras such as private treatment. Due to the sensitive nature of the business, our data is highly protected and access is strictly controlled. Some people imagine this kind of work as sitting in a cubicle separated from the rest of the world, but we liaise closely with our customers . The part about my job I like most, is delivering the right combinations of data knowing I’m helping someone else to do their job. It’s a bit like detective work.

How do salaries compare between Switzerland and Ireland?

It’s true that salaries in Switzerland are significantly higher than in Ireland, but the cost of living, especially for food, is high and most people will never afford to buy a home. In our area, a three-bed with small garden and no off-street parking costs at least €1.5 million with a 20 per cent down payment and you won’t get a three-bed apartment for under €1 million. Because the vast majority rent all their lives, pensions are a big issue. Private pensions are obligatory and state pension contributions are income linked. Then taking into account that a family on an average income spends more on health insurance than on tax, and that the average full mandatory working week is 41.5 hours (breaks excluded), it actually more or less pans out.

What is it like living and working in Zurich?

As an employee in Switzerland you’re well enough protected. I’ve never seen any harassment in our company, and levels of respect and tolerance are generally quite high. In Zurich childcare is either city-run or regulated and because it is mostly salary-linked, it means that part-time work is supported, and I’m seeing more and more men sharing childcare and working less.

What language is spoken where you live?

Did your children consider themselves Swiss or Irish?

I live in an apartment about a 20 minute walk from the centre of the town with my two daughters Sophia (20) and Vanessa (16). The girls are very aware of their Irish heritage, which they really appreciate, but they are definitely Swiss. For me it was always clear that they need to be fluent in English, so at home we speak English, though they use Swiss German when I’m not in the conversation. Both are still in the school system, which is different to the Irish system. Ultimately, it’s more flexible and Sophia is now studying to qualify for college after having completed a three-year apprenticeship as a pharmaceutical assistant. Vanessa will probably follow a similar path in a different area. Most Swiss use the completely free public school system, but there are enough private schools and ex-pats tend to use the international schools.

Public transport here is brilliant, and you can be in the Alps in Germany or France in an hour. Because Zurich is so compact, it is easy to get around, but it still has everything a city has to offer. Zurich is probably best known for its old town, its river and it’s lake and parks. In summer it feels like you’re on holiday at home because half the city is at or on the water. The health system works so well because it’s properly funded and regulated. Air quality is good, unemployment is low, cycle lanes are well developed and the church is separated from the state. The Swiss have a reputation for being reserved, but I think that is true of most countries compared to Ireland. Nearly one-third of this city holds a foreign passport, so there’s an open and international feel to it yet you still know you’re in Switzerland.

Do you still feel Irish?

I still feel mostly Irish. I call myself Irish and I don’t think that ever really goes away, but I can’t see myself going back. I’ve been gone too long and anyway it’s not an option because this is my daughters’ home and my home too. I love visiting Ireland and I usually go over at least twice a year. My parents and one sister are in Dublin, and I’ve a sister in France and my brother is in Scotland. The Irish Times online is a great way of keeping up with things Irish and occasionally I’ll tune into an Irish radio station.

What do you miss about Ireland?

The things I miss most about Ireland, apart from family and the more relaxed culture, is the sea and things like really good Irish sausages, but life is good here and I think Zurich is more child friendly than Dublin nowadays. There’s no such thing as school runs and children walk to kindergarten when they are five and no one gets driven to hockey or soccer. When I’m in Ireland I try to stop myself when I get annoyed if things aren’t working, because Ireland wouldn’t be Ireland if it were like Switzerland. Anyway, Switzerland isn’t perfect by a long shot. It can be a bit too controlled.

I don’t know many Irish here because I don’t move in expat circles and there aren’t many Irish who actually put down permanent roots here. The Irish are definitely generally well liked and there are Irish pubs. Irish music is quite popular. There’s even a GAA club. I would say to anyone thinking about working in Zurich to go for it. Get in contact with expat groups. Swim, sail, walk, row, pleasure boat or cycle the lake. Get a train or cable car into the local hills. Enjoy the myriad of street cafes and restaurants when the weather’s nice. Join a club, learn some German, socialise and give it a year.

If you have an interesting career overseas and would like to share your experience with Irish Times Abroad, email abroad@irishtimes.com with a little information about you and what you do