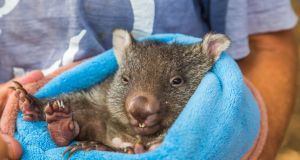 ‘Eóghan will be the last wombat I hand raise before I head home to Ireland, for good’. File photograph: iStock/Getty

Sitting here on the verandah looking out over the forest and rising moon, that recent drop of rain has the place looking a bit green, which is unusual for Australia. If it wasn’t for the crickets singing, I could nearly be convinced I was in Ireland, although here comes Eóghan to keep my mind from wandering there.

He clambers up the steps and stands up on his back legs before me. He looks at me with his big eyes. He has grown so much in recent months that I strain as I lift him onto my lap. This wombat sure has me under the thumb. He comes to lie across my chest, his chin resting on my shoulder. Soon he is softly snoring. He will be the last wombat I hand raise before I head home to Ireland, for good. I close my eyes too and think about my seven years in Australia.

I’m a long way from home – Colmcille, on the shores of lough Neagh, Co Armagh. It’s 10 years since I graduated from University College Dublin (UCD) as a vet. After a few years of working at home, I was filled with wanderlust and did what many young Irish vets do and headed for Australia. The intention was a one-year working holiday. After nine months that became a permanent residency visa and as the years began to whizz by, eventually I got Australian citizenship.

In the early days there were many of my Irish vet classmates working here too. I recall at one New Years’ party in Melbourne about five years ago we counted 30 Irish vets in one group photo. As the years pass, reunions like this have turned into going-home-to-Ireland farewells. There are very few of us still here.

Over the years here I’ve worked in many different places, initially on a full-time basis and later, as I wanted to travel, I worked as a locum (covering maternity leave and holidays for clinics.)

I spent three years enjoying the Mediterranean type conditions of Margaret River in Western Australia, an area famous for it’s stunning beaches and numerous vineyards. I spent a couple of years travelling and working in the hot and dry Pilbara region, North West Australia and a few jaunts over to the east coast between Newcastle and onto Alpine Victoria.

I also spent two fantastic years working in Australia’s island state of Tasmania, with its manic four-seasons- in-one-day weather, much closer to that of home. A good example of this contrasting weather was one morning when I witnessed a large bushfire on a local mountain top. By that very same afternoon it was completely quenched under a blanket of snow. If only it was that easy in the other parts of Australia, currently ablaze.

In Western Australia I worked with beef and dairy farms, much like Ireland, but the herds much larger. Unlike home there’s no bovine Tuberculosis ( an endemic problem in many areas of Ireland) and just like home, margins are tight and getting tighter. Right now, the Australian farmers are suffering through a dreadful drought and praying for those ever-elusive rains to come.

Like my work at home, a large part of my vet work in Australia involved working with pets. In the hot summer months, pets suffering from acute heatstroke were a frequent presentation at the vet clinics. I’d never seen a similar case in Ireland. Those summer months would also bring out the snakes, and dogs and cats suffering from a snake bite were a common emergency too. Thankfully we could save many of them, if they got to the clinic in time to have life saving anti-venom administered.

I got to know many Australian vets, along the way. Some of them had tales of their time spent in the Northern Hemisphere, working in Ireland and the UK. One Aussie fellow told me of an enjoyable year he had working as a farm vet in Donegal, surfing in Bundoran in his free time ( with an extra thick wetsuit of course.) Another Aussie vet (born to Irish parents in Australia) had spent his first year after college in Ireland brushing up on his fiddle playing, working and travelling around the Irish music scene.

I met many Irish expats too. Some would cheerfully tell me their stories of how they left and didn’t look back, others would well-up and tell me of their terrible longing for home. One lady, Eileen, had been living down under for 50 years. A retired nurse, she still had a strong west Clare accent. When she was widowed, she had started up her own native animal rescue. She taught me many things about how to care for orphan kangaroo joeys and wombats. There was something so special about an Irish nurse, teaching an Irish vet how to look after native Aussie animals, in Australia. She had a story for each of her animals ( some were long term lodgers) and how they had helped her through her bereavement, especially her old rescued Labrador, Eddie, and Albert her talkative Cockatoo. Eileen got so much joy from the animals, she frequently quipped that she wasn’t always entirely sure as to who was exactly rescuing whom.

I tried to get home for a trip at least once a year. At the end of the trips I got to be very sad about leaving Ireland, a feeling that seemed to get worse each time. After much agonising I have decided it’s time for me to return to Ireland. I will do it the other way and take a few trips to Australia in years to come.

Here, one of my last Australian nights settles in around me. As I come back from my reverie, smiling at the prospects of moving home, although feeling a few pangs of anxiety about it all, strangely it’s an Aussie accent in my mind that says,

Now, how am I ever going to break the news, to Eóghan.

Since I wrote this article the world has watched the heartbreaking images as the bushfires escalated to unprecedented levels. Where I am in Tasmania is largely unaffected but I’ve been speaking daily to my Australian veterinary colleagues, many on the front lines, along with the fire services and a tremendous number of Australian volunteers, everyone is fighting hard to rescue these animals and to treat their injuries. An estimated 1 billion animals are thought to have perished in these fires. There are also a huge number injured or displaced, with their habitat lost. Some of these vulnerable native species, such as the koala numbers, may never recover, but the Aussie spirit is strong.

Vet Austin Donnelly is originally from Co Armagh. He has been working and travelling around Australia for seven years, and  writing stories from his international work with animals along the way. His debut book, Whiskers, Feathers & Fur: Veterinary Tales, is available here, and he writes a blog here