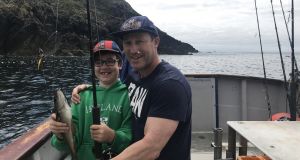 Where did you study?

I studied at the University of Wales in Aberystwyth and at Inns of Court School of Law, London.

Tell us about your family

Both my parents were born in Co Waterford - my Mum in Ardmore and my Dad in Cappoquin. Both moved to Clonmel, Co Tipperary as children. My Dad moved to England when he was only 15. Having spent their working lives in England they returned to Clonmel, where they still live, in 1997. I met my wife in Perth in 2004 and we have two children Isabella, aged 14, and Patrick, who is almost 12. We also have a Cairn terrier and a Chesapeake Bay retriever. We get back to Ireland virtually every year, and this summer spent a wonderful time in Dublin, Dingle and Kinsale. The highlight for my son was catching a pollock, about half his length, off the coast of Kinsale. My children consider themselves Australian, but are very aware of their Irish heritage. My wife’s dad is Greek, so that side of their background is important as well.

How did it feel growing up Irish in England? Where did you live?

I lived in Plymouth. I started to identify as Irish from about the age of nine or 10. Probably because I have no brothers and sisters and so my extended family, in particular my cousins all of whom lived in Ireland, assumed a great significance in my life. I also went to a Christian Brothers school.

Do you feel Irish when you were in Ireland?

Yes. Apart from the period 2004 to 2009 when my children were very young I have come back to Ireland every year of my life and never felt out of place.

Why did you choose a career in law and is it easy to make the transition to the Australian system?

I was always reasonably good at debating and public speaking and gravitated fairly naturally towards a career in the law by the age of 15 or 16. I went to Australia initially in 2000 and because I was admitted in Queensland I did not have to undergo any further examinations, although that situation has now changed. I returned to the UK, but then successfully emigrated to Western Australia in 2002 where I obtained employment with the Commonwealth Director of Public Prosecutions. I was quickly immersed into one very large tax fraud case and so I did not have the immediate pressure of multiple court appearances while getting used to a new jurisdiction.

All in all, I found the transition from working as a lawyer in the UK to one in Australia fairly manageable. There were more similarities than differences in terms of the rules of evidence and procedure, although having to start again with a whole new landscape of opponents and judges was obviously challenging.

Tell us about your career there

I was appointed a District Court Judge in 2016. I spend a lot of my time presiding over trials involving a jury as well as sentencing offenders for a wide range of serious crimes. I also spend about eight weeks a year dealing with civil litigation including, for example, cases of medical negligence. Although the District Court is based in Perth, I travel to the regional courts for two weeks at a time, about three or four times a year. Western Australia is twice the size of Texas.

Do you know any Irish people there and how do you fit in to the Irish community?

I was a member of the Irish club in the suburb of Subiaco for a little while and was also involved some years ago with the committee that organised the St Patrick’s Day parade, which was then held in Fremantle. I know the current organiser of the St Patrick’s Day committee through my son’s brief stint with a rugby club that he is involved in. Also, some years ago my junior counsel in a murder trial I prosecuted was a very good woman’s Gaelic footballer from Dublin.

Effortlessly! There is an Irish exiles rugby club and a well-regarded soccer club, Shamrock Rovers, as well as a number of hurling and Gaelic football teams. After a gap of a few years the St Patrick’s Day festivities in Perth are better than ever.

How have the fires in Australia affected you?

Bushfires have always been a fact of life in Australia, but the scale of the present fires on the East Coast seem unprecedented. While we are not directly affected here, they are devastating for all Australians. The loss of wildlife, homes and of course lives has been awful. The firefighters have done an extraordinary job, and we try and support them in every way we can. The precise causes and what should be done in the future to try to mitigate the loss is a matter of on-going and intense national debate, upon which it would be inappropriate for me to comment.

Perth is a wonderful place to live. Apart from about three or four months when we have what passes for a winter, the weather is incredible. We live about a 15-minute drive to the Indian Ocean. The quality of beaches here is better than I have seen anywhere in the world with the possible exception of Hawaii. Twenty minutes inland is the Swan Valley with a plethora of high-quality wineries and microbreweries. In the 17 years that I have been here, the CBD (Central Business District) has become markedly more vibrant with a host of small bars and exceptional restaurants. Perth is beautifully situated on the Swan River and has a world-class sporting stadium, the Optus stadium. We have one top-class AFL team, the West Coast Eagles, who I was fortunate enough to watch win the grand final in Melbourne in 2018. Sadly we lost the Western Force from the super 15 rugby competition, although I retain some hope for a revival at the highest level. All Perth really lacks are mountains.

When I arrived in 2002 accommodation was relatively affordable compared to the average salary and I was able to buy my first property in 2003. Although the price of property then rocketed, it has decreased markedly over the last five years and is now reasonably affordable. On a good day I can drive from my home to my office in 15 minutes. Our children go to schools in the CBD, so the morning work/school run is very manageable.

What advice would you give to someone maybe interested in pursuing a legal career abroad?

Definitely go for a salaried position as opposed to working in a self-employed capacity as I erroneously did in 2000. Be prepared to take one step backwards to go to step forwards. If you can find a position that is not completely alien to your current experience, that will keep you busy and which has an engaging group of colleagues, in my experience you will succeed in making the transition. It is a big step obviously. Try to give yourself 12 months at least before deciding that it is not for you. When I moved from the UK to Australia I was single and so it was much more challenging than if one was moving with a family. It rather helped that I met my wife two years after I arrived.

My wife’s background is Greek and I recently attended a function hosted by the Hellenic Australian Lawyers Association. I think there is definitely merit in an Irish Australian Lawyers Association. I discovered a year or so ago that the mother of a law student then working in my court as an usher, went to school with him. Similarly at a business dinner a few years ago I bumped into a bank manager who went to school with my cousin in Clonmel.

Proximity to family obviously. Skype has made a massive difference and over the years and my parents have made a number of trips to Australia, although their travelling days are now behind them.

I miss being able to watch Ireland in the Six Nations and I would have loved to have been able to get to see Munster live more often. It is completely impossible to get a Guinness as good as in Ireland.