What has made Irish-Americans so alienated from their ancestors? 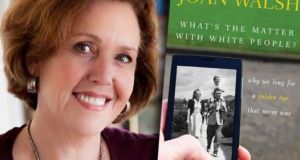 Joan Walsh’s book explores why so many Americans are convinced that they made it by themselves, and resent anyone receiving help today.

St Patrick’s day in New York has a time-capsule feel to it. Terry McGovern says her mother was confused as to why the LGBT community wanted anything to do with it. They should be running in the opposite direction from all those white Catholic, conservative men, she used to say. Terry McGovern’s mother was killed on September 11th, 2001, in the attacks on the World Trade Centre.

McGovern, a long time civil rights activist and academic, hates the way her mother’s murder has been used as a flag of war for the far-right. She also hates the racist reputation the Irish in America garnered for themselves. She has spoken at Irish Stand events in New York and Dublin and will speak on Friday night again.

What is remarkable about the Trump administration is how prominent the Irish names are, even after the departure of Sean Spicer, Steve Bannon and Michael Flynn. Throw a stone in the White House and you’d probably hit a Kelly or a Conway or a McConnell or a Ryan or a McCarthy. What is it that has made the Irish-Americans so alienated from the struggles of their immigrant ancestors, or so disconnected from the debates at home?

It was almost a year after the passing of the marriage equality referendum that an LGBT representative group was finally allowed to march in the St Patrick’s Day parade in New York. The vice-president Mike Pence speaks warmly about his Irish-born grandparents yet has a voting record relating to LGBT rights that would make your jaw drop to the floor. Irish politicians who preach equality in Ireland have no difficulty taking money from people of the same mindset when the basket is handed around at their fundraisers. For some, money talks and equality issues are secondary to the time-capsule filled with dollars.

Twenty years after the signing of the Good Friday Agreement, you will still spot “England Out Of Ireland” banners on display. The obsession with gun ownership is something Irish people, no matter what their political background, will find it impossible to get their head around. And the irony of budget secretary Mick Mulvaney with his green tie last St Patrick’s Day explaining why famine relief was being cut is lost on these conservatives with their own green ties.

Journalist and author Joan Walsh in her book What’s the Matter with White People? explores why so many Americans are convinced that they made it by themselves, and resent anyone receiving help today. Bill Clinton has said every American politician wants you to believe he was born in a log cabin that he built himself. The fact that the Irish were refugees, illegal immigrants and suffered discrimination and religious bigotry is lost on many Irish-Americans today as they nod in agreement with the anti-Mexican and anti-Muslim rhetoric from the President. Maybe its because they’re white that they feel more entitled. Joan Walsh will host the Irish Stand event this Friday.

America has issues from centuries back that it has singularly failed to address. It has in no way come to terms with slavery; with its internment of American-Japanese in the Second World War; with the Civil Rights movement of the 1960s or with its gun culture and polarising politics. Add to the mix a partisan media, with Irish names such as Sean Hannity, and it is hard not to fear for the country’s future. Comments that were previously whispered in corners are now shouted with gusto at rallies. It is a dangerous time.

But America is also rising to the challenge. The streets are filled with dissent, the college campuses alive with resistance and America is still the country the world looks to for a home from home, and for world leadership. Ireland, in between the great political earthquakes of Trump and Brexit, also must rise to the challenge. We can’t forget as we hand over bowls of shamrock to president Trump that we are the country of coffin ships, of famine, of terrorism, of sectarianism. But we are also the country of poetry and song and dance through which we tell our sorry tale. Irish-America cannot be allowed replace history with a green jacket and then to gleefully express their Irishness on St Patrick’s Day.

Irish Stand on Friday in New York will celebrate that true Irish story. We’ll be joined by Kerry Kennedy (daughter of Robert F Kennedy), Colum McCann, Maeve Higgins and activists and artists of all backgrounds to celebrate what it means to be human on this most Irish of occasions The time-capsule will be broken and a new generation will be handed the torch of resistance, just as Terry McGovern’s mother would have wanted. Tickets: www.irish-stand.com

Aodhán O’Riordáin is a senator with the Labour party The Irish Stand is a grassroots movement set up by Senator Aodhán Ó Ríordáin, writer Lisa Tierney Keogh others in response to the travel ban instigated by Donald Trump in January 2017. Backed by celebrities including Rosie O’Donnell and Martina Navratilova, the second St Patrick’s Day Irish Stand event in aid of the American Civil Liberties Union will take place in Riverside Church in Manhattan on Friday 16th of March.