Who are the Irish influencers driving London hospitality? 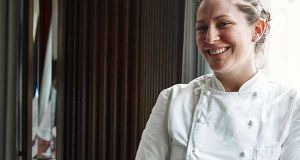 Shauna Froydenlund, from Derry, is chef patron at Marcus at the Berkeley hotel

A hospitality chief executive overseeing a restaurant group serving 8,500 guests a week, and a chef patron who worked with actors Bradley Cooper and Sienna Miller as a consultant on the film Burnt, are among 10 new entries on the fourth annual Murphia List, which puts the spotlight on Irish people shaping London’s hospitality industry.

There are 45 names on the list, released today, including chefs, restaurateurs, front of house personnel, behind the scenes workers, food and drinks producers, media and PR, and “ones to watch”.

The Murphia List is compiled by Irish-born, London-based siblings Catherine and Gavin Hanly, who established the Hot Dinners restaurant website in 2008. The pair havebeen included in a list of London’s 1,000 most influential people for the past six years.

New additions to the Murphia List 2018 include chefs Clare Smyth and Shauna Froydenlund. Smyth, from Co Antrim, who was the first female chef in the UK to run a three Michelin star kitchen when she worked at Restaurant Gordon Ramsay. Last summer she opened her own restaurant, Core, in Notting Hill.

Shauna Froydenlund, originally from Derry, is joint chef patron, along with her husband, Great British Menu finalist Mark Froydenlund, at Marcus restaurant in the Berkeley hotel in Knightsbridge. Her knowledge of how professional kitchens run was harnessed by the makers Burnt to ensure that the film portrayed the restaurant industry authentically.

There is just one new addition in the restaurateurs category – Brian Hannon of Super8 Restaurants, which include Smoking Goat, Kiln and Brat. Hannon in from Dublin and previously worked for Bass, running 400 pub sites.

Sinead Mallozzi, who was at one point in her career the youngest and only female London hotel general manager, joins the “behind the scenes” list as one of four new additions. She is originally from Co Clare and is currently chief executive at Sketch restaurant in Mayfair.

Noel Mahony, chief executive at Baxter Storey, also features in this category for the first time. The food service management company is active in sites from universities to Premier League football clubs.

A third chief executive, Patrick Dardis from Dublin, is another newcomer to the “behind the scenes” category. Dardis heads up Young & Co’s Brewery, where he was appointed ceo in 2016.

Charlie McCarthy, global cocktail consultant for Tullamore Dew, and creative director of allaboutthecocktail.com, is the fourth new addition in this category.

Richie Corrigan, elder son of chef and restaurateur Richard Corrigan, is a newcomer to the list in the front of house division. Recently promoted from assistant general manager at Corrigan’s Mayfair to assistant general manager of Corrigan Collection. He is joined there by another newcomer, Joanna Hughes, who is shop manager at Quality Chop House. Hughes, from Roscommon, has worked at Rose Bakery in Paris, as well as Sheridan’s in Galway and La Fromagerie in London.

The newcomers list is completed by food writer and broadcaster Diana Henry. Born in Northern Ireland, in her early career as a TV producer, Henry worked on many of Hugh Fearnley-Whittingstall’s programmes. She has also written 11 critically acclaimed cookbooks.

Charlie McCarthy (All About the Cocktail, Drinking Trends)