A phone call home will close the gap, but it’s not the same as being there 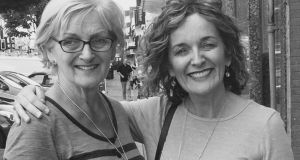 Yvonne Watterson with her mother Betty: ‘Happy Mother’s Day, ma. And thank you. It all makes sense now.’

I have worked in education long enough that it is not uncommon for me to encounter former students, some of whom are now married with careers and children of their own. It is always surreal to meet these adults who, just a twinkling ago, were writing in composition books about who they would become when they were all grown up.

Likewise, they are incredulous to discover that I am now the mother of a daughter who is older than they were when they were my students. And equally perturbed by this scenario and all its implications, is my daughter. A delicious juxtaposition, really – my former students confronting the truth that there really was more to me than being their teacher, while my daughter faces the realty that once upon a time I was not her mother, when other people’s children took up most of my time and thought I was hip with great taste in clothes, music, and hair.

And, long before that, there was another time when I was as young as she, sitting in my childhood kitchen, my mother at the ironing board telling me, “Daughter dear, the world is your oyster.” And perhaps to charm me out of my ennui, she would add, “sure, don’t you have the heart of a lion?”

Non-plussed, I dismissed her as someone who had no life before I came along, someone who could never have been a hopeful teenager or somebody’s BFF or the one with the great sense of style. But ma was all of these . . .

She is far away this weekend, in the place that made her, South Derry, the distance between there and where I sit in my Phoenix kitchen, stretched taut on milestone moments like Mother’s Day. A phone call or a visit on Facebook will help close the distance between us, me falling easily into the comforting colloquialisms of home, but it will not be the same. 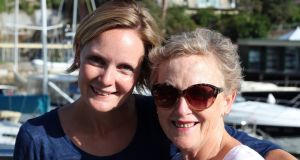 The sea is wide, but it takes only a second to transport me back to our house on the Dublin road. My brother’s not home from school yet, and there’s ma, leaning over the ironing board, smoothing out with hot steam the wrinkles in my father’s shirts, pausing – for dramatic effect – to remind me to consider the lilies, to “mark her words” that there will be plenty of time for work and plenty of fish in the sea. Implicit in her explicit admonishment not to wish my life away, was the fact that she was not wishing my life away.

Mostly, she struck an artful balance between shielding me from the world while empowering me to find the voice to explore its realities. But not all the time, especially not when I was in the throes of adolescent boredom, my eyes rolling to the heavens in response to the kind of home-spun wisdom I never thought I would miss.

“Don’t you know not to be wasting your money on a card? And the price of them . . . ” she’ll say, even though I know she loves to hear the tell-tale flap of an envelope falling through the letter box. And even though a cousin reminded me a week ago on Facebook with a smiley face and a wink, that I had a week to buy a card, and even though I marked it on my phone calendar, I ran out of time.

The inconvenient truth is that reminders of the American Mother’s Day won’t pop up in emails from Teleflora, or showy Hallmark displays in the grocery store, or at the carwash until after the Irish Mother’s Day has passed. In Ireland, Mothering Sunday is the fourth Sunday in Lent, thereby falling on a different date every year. In America, Mother’s Day arrives each year on the second Sunday in May – after St Patrick’s Day, Passover, Easter, Administrative Professional’s Day, Cinco De Mayo, and Nurse’s Day.

I once had a strategy to cope with this annual conundrum – outsmarting the calendar with the clever purchase of two Mother’s Day cards in May – one as a sort of consolation prize for possibly having forgotten the Irish Mother’s Day, the other for the subsequent March. It is a brilliant plan, except it rarely works, because I will put the card away for safe-keeping, in other words I will lose it amongst bills and all the other papers I need for the Tax Filing Deadline Day in April which, naturally, is sandwiched between the two Mother’s Days (but after my birthday which sometimes coincides with Easter)- along with all the aforementioned holidays that someone has kindly listed on the Greeting Card Universe website.

Having also missed the deadline for same-day delivery of flowers, I will instead take my mother back with me to an enduring childhood memory. Scrubbed clean and uncomfortable in our Sunday best and with all the other children, we are proceeding in a crooked line up the aisle of Antrim’s All Saints Parish Church, to collect from a beaming Reverend Thornton a single fresh flower to give to our watchful, waiting mother.

And thank you. It all makes sense now. Just when you thought you didn’t need to watch over me anymore, you are right back where you started in 1963 – wishing only the best for your baby girl.

Originally from Co Antrim, Yvonne Watterson emigrated to the United States in 1988 and settled in Arizona where she works in education. She is director of education innovation at the Arizona Charter Schools Association. She has been recognised for her work in school reform and her activism on immigration. She blogs at Considering the Lilies . . . and Lessons from the Field where a version of this article originally appeared.