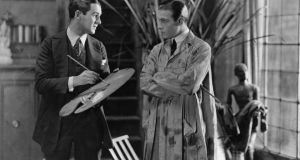 David Lean called him his idol, while Michael Powell insisted he was “the greatest stylist of our time”. Reginald Ingram Montgomery Hitchcock (Rex Ingram) left an enduring legacy for film directors, despite a reputation so difficult it was said that in 1929 he told a young Alfred Hitchcock he should change his name if he wanted to get anywhere.

He was born in 1893 in Rathmines, Dublin. In 1905 he was sent to St Columba’s College, Dublin, where he excelled in boxing and rugby but often fell foul of the school authorities. The death of his mother in 1908 had a decisive influence on his life, and he resolved to leave the country. He arrived in New York on July 3rd 1911, and never visited Ireland again.

In 1912 he entered Yale, where he studied sculpture. Meeting Charles Edison, son of the inventor, turned his mind to cinema. He was employed as an actor by the Edison Company in New York, then by Vittagraph. In 1915 he was hired by Fox, and changed his name from Hitchcock to Ingram, after his beloved mother. Moving to Universal in 1916, he directed his first silent film, The Great Problem.

As the industry relocated to Hollywood, so did Ingram, and he directed four films in 1917 before being dismissed. Having established a reputation for being brilliant but impossible to work with, he was hired by the Metro Picture Corporation (later MGM) in 1920. During the filming of Shore Acres he fell out with his cameraman, and was given the young cinematographer John Seitz, which turned out for the best as it marked the start of a great partnership.

With The Four Horsemen of the Apocalypse, based on the novel by Vicente Blasco Ibánez, Ingram created a masterpiece. Shooting began in July 1920 and lasted six months, unheard of at the time. With June Mathis, who wrote the screenplay, he insisted on the unknown Rudolf Valentino for the lead; Alice Terry played the heroine. His younger brother, Colonel Francis Clere Hitchcock, advised on military matters, and filming involved 12,000 people.

The Four Horsemen was an international success, though on its opening in Dublin it was savaged by the press. It was followed by The Conquering Power (with the same lead actors), which was greeted with more critical acclaim. However, relations between Ingram and Valentino soured, and they never worked together again.

More popular success followed in 1922 with The Prisoner of Zenda, again starring Terry, whom he had by now married. Ingrram took one of his handsome players, Ramon Samaniegos, and, changing his surname to Novarro, set out to make him as big a star as Valentino.

Ingram moved to France in 1923, determined to make his own films. In Nice he directed The Garden of Allah (it is believed he converted to Islam at this time). In 1925 he was entrusted with cutting Erich von Stroheim’s classic, Greed, though the film was later further cut despite both men’s protests. In 1926 he was awarded the Légion d’honneur Francaise.

In 1927 his MGM contract was not renewed, and he purchased the Nice studio for $5 million, though he later lost control of it, being erratic when it came to business.

The Three Passions (1929) was his last silent film, and with the advent of sound he lost his interest in directing. He played the lead in 1931’s Barroud before he decided to retire, moving briefly to Egypt. Ingram died in July 1950 in California, and was cremated.

A genuinely innovative director, he helped to define and develop the cinematic medium. Erich von Stroheim said of him, “he was a very proud man and wouldn’t have done the things I did. He never stooped, he never gave any publicity and was a little huffy - he was very Irish.” His most famous epitaph was given by James Joyce in Finnegans Wake: “Rex Ingram, pageant master”.

Based on Patrick M Geoghegan’s biography of Rex Ingram (edited for this Extraordinary Emigrants series for Irish Times Abroad by Clare McCarthy) in the Royal Irish Academy’s Dictionary of Irish Biography.

The Four Horsemen of the Apocolypse will be screened in St Patrick's Cathedral in Dublin, featuring a new score by Matthew Nolan and Barry Adamson performed live by musician/composer Seán Mac Erlaine, songwriter/composer Adrian Crowley, and Kevin Murphy (Slow Moving Clouds) on Thursday March 15th at 8pm, as part of the St Patrick's Festival. Tickets cost €24 from bit.ly/CineConcert