St Patrick’s Day: around the world in 10 parades 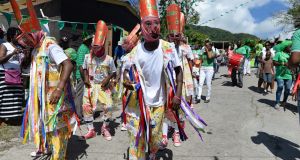 Montserrat’s St Patrick’s Day parade features dances that originated as a form of expression to allow slaves mock their masters without being recognised. Photograph: Frank Miller

The first official St Patrick’s Day parade in the French capital will leave from the Irish Cultural Centre and will follow a route through the Latin Quarter in the 5th arrondissement. It is being organised by the Irish in France disapora association and will be attended by the Ireland’s Ambassador to France, Patricia O’Brien. It will be led by the Paris and District Pipe Band.

Approximately two million people are expected to line the streets of Midtown Manhattan for the biggest St Patrick’s Day parade in the world. Running since 1762, the NYC parade starts from 44th Street and 5th Avenue and runs up the avenue to 79th Street. Loretta Brennan Glucksman of the American Ireland Fund is Grand Marshal and you can follow the action live on NBCNew York.com.

In 1678, more than half of the Caribbean island’s population was made up of Irish Catholics, who sought refuge from persecution after the West Indies was settled by Cromwell. March 17th is celebrated as a national holiday, marking the 250th anniversary of an unsuccessful slave uprising in 1798. The 11-day St Patrick’s Festival (March 9th-19th) is a celebration of Montserrat’s Irish roots and includes cultural and social events as well as the parade.

For a city with so many inhabitants who are Irish or of Irish descent, Sydney’s St Patrick’s Day festivities have a chequered past. There hasn’t been a parade there since 2015. Last year there was none due to construction works in the city, and in 2016 it was cancelled due to debt issues. But Sydney Opera House is turning green again for the 2018 celebrations, having last been lit up in the Irish national colour in 2014. The parade is due to take place at the Entertainment Quarter, Moore Park.

Irish Week 2018 (March 14th-25th) is the largest festival of Irish culture in Russia and includes the 11th Moscow Irish Film Festival, as well as the St Patrick’s Day parade, which takes place on the 24th of the month, at the entrance to Sokolniki Park. On March 17th, an eight-hour music marathon, St Patrick’s Day & Night, takes place in Izvestiya Hall.

Gastronomy becomes part of Moscow’s Irish Week for the first time in 2018. Diners can order a green burger (a green bun and guacamole added to a black Angus patty) at Starlite Diner. Chicago Grill & Bar is running workshops dedicated to Irish cuisine, with Irish stew, potato bread, Irish breakfast and chowder on the menu.

The London parade is part of the three-day St Patrick’s Day Festival (March 16th-18th), which brings more than 125,000 people to events across the city centre. The parade will follow a 1.5mile (2.4km) route down Piccadilly to Whitehall, with actor Imelda Staunton and broadcaster Gloria Hunniford as joint Grand Marshals. Trafalgar Square is HQ for the festival, with musical entertainment and an Irish Street Food Market.

The Irish community in South Korea is relatively small, but the popularity of the St Patrick’s Day celebrations has swelled year-on-year since they were first held in 2000. It is hosted by the Irish Association of Korea to promote Ireland and share its sporting and cultural traditions with the Korean community. The theme of this year’s event is “An Irish Welcome”.

Everything goes green in Chicago for St Patrick’s Day, from the city’s biggest landmark buildings, to the Chicago River, which has been dyed a luminous shade by the Chicago Journeymen Plumbers since the early 1960s. Environmentally-friendly colouring is added to the water on the morning of the parade.

The personal finance website WalletHub recently named Chicago as the best city in the US in which to celebrate St Patrick’s Day, on the basis of a survey of 200 cities and considering factors including St Patrick’s Day traditions, costs, safety and accessibility and weather.

While it is not strictly speaking a parade, the Irish contingent taking part in the UAE Happiness Carnival at City Walk, Dubai, are turning their section of the carnival into Dubai’s first St Patrick’s Day parade, with Irish music and dancing.

The Irish have flocked to Western Australia in recent years to work, and with so many Irish families now living there, the community came together in 2013 to restart the annual St Patrick’s Day parade, which had not been held in four years. The parade will again take to the streets of Leederville and will be followed by a family fun day at Medibank Stadium. The theme for the parade is “The Future” and it is the final part of a three-year concept of past, present and future.