Five things Irish schools could learn from the Netherlands

Less pressure to ‘achieve’, multiple languages and cycling everywhere - our kids love it 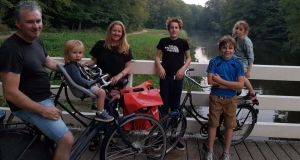 Margaret Kearns with her husband and four children in Amsterdam, where the family have lived for six years.

Several recent reports have found that Dutch teens are among the happiest in the world, and having lived here for almost six years with my family, I have to concur.

When we arrived here, we had no idea how it would unfold: moving abroad with a family and no social support, to a new culture, new language and new country. We thought we would stay for three to five years, travel and have new family experiences. As it turns out, it’s a hard place to leave. So, here we are, six Amsterdammers now: four fluent Dutch speakers and two parents who are… getting there.

My teens attend a Gymnasium, a type of school that offers only a pre-university track. When they receive their final year diploma, they will have entry to almost all university courses in the Netherlands. Virtually all schools are publicly funded, books are free, there are frequent trips and no fund-raisers; all excellent news for parents.

They love their school and growing up in Amsterdam, and here are some reasons why.

Cycling to your school is ubiquitous, about as common as bread and cheese for lunch, and three kisses for greeting a fond friend. Biking alone to school begins when kids are as young as 10 or 11. When secondary school comes along, kids cycle independently. Building exercise into a teen’s day helps keep them fit, regulates their mood, and arguably toughens them up a little. Dutch kids cycle on average 2,000km a year. It’s probably more than that for my kids and many others who cycle literally everywhere: to school, friends’ houses, after school clubs, swimming, cinema and so on --every day of the year, rain, hail and snow.

Bikes are king in the Netherlands where most people have two (usually second-hand) and all journeys under 2km are taken on two wheels. The infrastructure is so firmly in the favour of cyclists that my kids can get to school via bike lanes 90 per cent of the time. Everyone cycles, car-owners also bike regularly, so there is mutual respect on the road.

Kids here are expected and encouraged to be responsible for their own learning, guided by parents and teachers when necessary. There is no shame in repeating a year. It is fairly common and the view is taken that a child isn’t ready socially/emotionally/academically, as opposed to not being good enough. It’s delightfully called “doubling’’ a year, not “repeating” a year, a totally different emphasis. Teenagers are trusted to make decisions and then learn from inevitable mistakes. After all, nothing ventured, nothing gained. They are given an incredibly large window of freedom that has gradually expanded since they were four years old. Children in the Netherlands are not only seen, but expected to be seen and heard.

It’s a good life: from school parties starting at 10pm until 2am (that was a shock) to co-educational classrooms, no uniforms, open dialogue with parents around sexuality and adolescence, a musical and creative school atmosphere, helpful classmates and good teachers. The focus at school is to encourage motivation from within, rather than extrinsic motivation. Dutch children are seen as autonomous and not a reflection of their parents--this of course has obvious benefits for when your small kid throws an almighty tantrum, or says an emphatic no to a playdate. No offence is taken, people shrug in acceptance, and parents neither bask in the glow of shame or pride. As an Irish mum parenting teenagers in Dutch society, I’ve taken on a similar attitude, and it really helps when most parents around you are following similar methods.

Adjusting to homework in secondary school is a steep learning curve, coming from Dutch primary school where there is practically none, but step by step it works out. There is zero expectation to burn the midnight oil on studies. No kudos are awarded for working so hard that your social life suffers. Instead of aiming for top scores and little downtime, teenagers are encouraged to keep their friends, social lives and hobbies. On the weekends, they will do a couple of hours study, but there is plenty of free time. Travel time to school is kept to a minimum so there are more hours in the day.

Sleeping in on Saturday mornings is their most recently acquired life skill, while Sundays are for sports, general lolling about, and family stuff. One strong aspect of Dutch society is to aim for a balanced life, and the general culture of taking care of oneself is important for young people also. Every six weeks or so, there is one week’s school holiday to recuperate. The six-week summer holiday gives a good chunk of time off for camps and family holidays, but not so much that you have bored teens hanging about the house for weeks on end. It’s a blessing, believe me.

Speaking Dutch and English every day is normal for many Amsterdammers. Some French and German knowledge is common too. Other languages like Turkish, Arabic and Spanish are commonly heard in this very international city. There are at least 180 different nationalities living in Amsterdam.

At my kids’ school, six compulsory languages are part of the programme: Dutch, English, German, French, Latin, Ancient Greek. Once they reach Year 4, profile choices are made and Latin or Greek can be dropped, but not both. Learning the classical languages is an integral part of attending a Gymnasium; the pay-off is a week-long trip to either Rome or Athens in Year 5, paid for by the low yearly parental contribution. They also like Latin as a subject. Similarly, a week-long trip to Berlin, York or Paris takes place in Year 4, depending on the language studied. English and Dutch are compulsory until the end, which makes for very competent multi-linguals exiting school aged 18.

The grading system is marked from 1 to 10. Extremes at both sides of the spectrum are unusual. Getting an 8 is a really great score, 7 is very good, 6 is satisfactory and less than 5.5 is a fail. 9 is excellent and 10 is outstanding and rare as hen’s teeth. 9s and 10s are rarely awarded. 7 is a good mark and 8 is for the ambitious. So why don’t schools award 9s or 10s? It’s probably related to the zesjescultuur, the culture of mediocrity or “hey, 6 is just fine”. The push for excellence and striving for the top is not the norm here.

The upside is that kids here fare very well in terms of wellness, friendships and happiness. At my kids’ school it’s seen as pretty cool to be smart but it’s not the end-game: dumbing down or working like crazy to get all 9s are not desirable options. There is a prevailing egalitarian attitude which applies to the guy stocking shelves at the supermarket, the tram conductor and to the medical doctor. I admit though that for this non-Dutch family, a 6 isn’t really fine.

By the time kids finish middelbareschool, they are ready to unleash their Dutch confidence onto the world. My children have a mix of Dutch assertiveness and Irish humour which I love. They love Irish traditions and culture while being very happy living in the centre of Europe. Self-belief runs like water through this small country that has fought back against the North Sea, and I’m very glad my kids will gain some of it by osmosis.