More Irish emigrants returning than leaving for first time since 2009 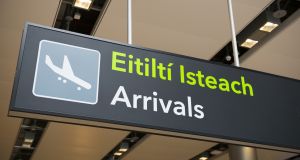 The number of Irish people returning to live in Ireland from abroad has overtaken those emigrating for the first time in nine years.

The total number of emigrants (both Irish and other nationalities) leaving Ireland was the lowest since 2008, at 56,300, a drop of 13 per cent on the previous year, and 32 per cent lower than the peak in 2012.

The popularity of Australia among migrants from Ireland continues to fall, with just 4,500 people of all nationalities moving there in the period, down from 5,300 the previous year, and 17,400 in 2012 when numbers peaked.

There was a significant rise in the number of people moving here from the US in the period, up 35 per cent on the previous year to 7,300. Immigration from “rest of world” countries (which excludes the UK, EU, Australia, Canada and the US) also increased substantially, from 22,800 to 27,400.

Combined with the net inward migration figure, this brings the total estimated population of Ireland to 4.86 million, 12.2 per cent of whom are non-Irish nationals.