Who can blame Declan Rice if he feels more English than Irish? 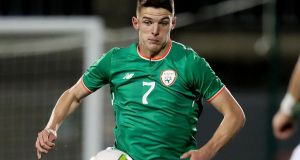 Declan Rice is of Irish descent through his father Séan, whose parents Margaret and Jack are from Douglas in Co Cork. Photograph: Tommy Dickson/INPHO

West Ham United’s Declan Rice is perhaps the most promising player to come through the under-age Irish set-up in decades. At just 19, he can play as a centre-half or in midfield. He is athletic, and already a top-class footballer. In two of his three caps for Ireland, against Turkey and the United States, he was man of the match. In the third, against the eventual world champions France, he held his own.

This is why the news that he is now considering playing for England has been received with such consternation by Irish football fans. London-born Rice, who qualifies to play for Ireland through his father’s Irish parents, was left out of the squad for Ireland’s forthcoming Nations League games against Wales and Denmark. These are competitive matches, and under Fifa rules, if he plays in either of them, he will not be able to switch international allegiances.

He has been approached by England and is considering his options.

Many have been dismayed by his decision, most notably former Ireland international Kevin Kilbane who tweeted: “I’d rather be ranked 150th in the world and never qualify again than have someone who has played, but needs time to THINK whether they should play for us again.”

Kilbane was born and brought up in England. His mother, Teresa, was from Co Longford; his paternal grandparents were born in Ireland. He was called up to play for England at under-age level, but declined and went on to win 110 senior caps for Ireland.

His response to Rice’s vacillation is entirely understandable. Kilbane is typical of many second and third generation Irish in Britain who do not feel anything other than Irish. This often makes them an outsider in both countries. They grow wary of having to explain themselves to others, not least the Irish themselves who cannot look beyond the English accent. Kilbane would see Rice’s potential defection as undermining the claim of the second and third generations in Britain to be considered as Irish as the Irish in Ireland.

Football pundit Richie Sadlier described Kilbane’s comments as “monumental bollocks”, but then Sadlier, who won one cap for Ireland, never had to explain or justify his Irishness to anyone else.

There are others though who feel differently to Kilbane. The children and grandchildren of Irish emigrants to Britain operate on a spectrum of identity. Some consider themselves wholly Irish, others wholly English, but the majority would see themselves as a bit of both, as Morrissey so pithily put it in his song Irish Blood, English Heart

This I’m made of,

There is no one on earth I’m afraid of,

And I will die with both of my hands untied.”

Presumably Rice inclines to that mixed heritage. A lot of the disappointment felt by Irish fans is down to his ability, and also to his pronouncements in March that there was no question of who he would eventually play for at international level.

There are suspicions that Rice is having his head turned by his agent, who is telling him he will earn more as an England player. Rice is likely to have a very lucrative career anyway, and being from a (relatively) small country, Portugal, hasn’t stopped Cristiano Ronaldo becoming the best paid footballer in the world.

Some of the criticisms are over the top. After all, Rice has been approached by the country of his birth to play for them. He is of Irish descent through his father Séan, whose parents Margaret and Jack are from Douglas in Co Cork. It is conveniently forgotten that he is also half-English, from his mother’s side. It ought to be entirely understandable that a player might want to play for the country of his mother and of his birth.

Football is a good microcosm of immigrant identity. Seventeen of the 23 members of the French squad which won the World Cup were from immigrant backgrounds. Less well known is that 35 French-born players were in other squads for the World Cup, including 13 for Morocco, and seven for Tunisia. Like Kilbane, many felt a stronger affinity with the land of their parents than the land of their birth.

The Republic of Ireland teams in recent decades would not be able to compete without the presence of those who were born outside the jurisdiction. Shane Duffy and James McClean were both capped at underage level for Northern Ireland and we poached them. What goes around comes around.

The issue of identity for them is clear cut. But how will it be for the “new Irish”, the children of immigrants who were born and reared in Ireland? Already, as evidenced by current under-age Irish squads, a large amount of children of immigrants are on their way to being future internationals. One of them is the Irish-born Southampton striker Michael Obafemi who is also wanted by his parents’ country, Nigeria. What if players like him decide to play for their parents’ country and not the one they were born in?

People are entitled to their identities without having to explain them to others. Having been a net recipient in recent years of those who claim Irish identity but were born abroad, we can hardly complain if those born here feel the pull of their ancestral homelands strongest.