Was this Irish spy the inspiration for James Bond’s ‘M’? 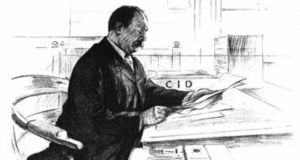 In 1903, Melville surprised newspaper readers and crime fans by announcing his retirement. In truth, he had been recruited by the War Office for the new intelligence gathering agencies which would become MI5 and MI6.

Like many Irish emigrants, parts of William Melville’s history are uncertain. Family lore, as recounted in the excellent research curator Helen O’Carroll has done for the Kerry County Museum, tells of Melville going to collect supplies for the family bakery and pub and never returning, but the date of his leaving and his reasons for doing so are unknown. This theme of mystery and subterfuge continues throughout Melville’s eventful life.

William Melville was born in Sneem in 1850, educated to secondary level, excelled at hurling, and made his way to London around 1872. He became a Constable in the Metropolitan Police, quickly working his way up to the rank of Detective Sergeant. He made his name during the Fenian bombing campaign of the 1880s, and the anarchist campaigns of the 1890s.

Melville was a hard worker, calm, reserved, passionately proud of his Irish Catholic heritage, a Home Ruler, but opposed to terrorist tactics. He also had a talent, it seems, for manipulation, and employed a network of informers and provocateurs, the extent of which only came to light after his death.

Melville was involved in the exposure of a number of high profile terrorist plots during his career. The first of these was the Jubilee Plot to assassinate Queen Victoria, exposed in 1887 while Melville was working for the Special Irish Branch (later to become ‘Special Branch’). Seemingly a Fenian plot, the whole affair was later revealed to be a conspiracy by the then government and The Times to discredit Charles Stewart Parnell by linking him with Fenian violence - but by the time this was uncovered, Melville’s reputation as a hero was firmly established.

As the 1880s drew to a close, the perceived threat of anarchist bombers from the continent began to cause anxiety among the public. Melville foiled the Walsall Plot in 1892, an attempt by anarchists to manufacture bombs for use against the Russian regime. However, as with the Jubilee Plot, all was not as it seemed, and suspicions were raised that one of the agents involved, Auguste Coulon, was in Melville’s pay. These rumours have since proven to be true. It seems that Special Branch’s priority was to dispel European criticism of England’s supposed soft stance on anarchists - by any means possible.

Melville was involved in a number of other high profile raids and arrests, including the highly dramatic capture of the French anarchist bomber, Theodule Meunier. When Melville spotted the bomber at Victoria station, he gave pursuit. Meunier resisted, attempting to drag Melville under a train, and a journalist who happened to be passing recorded the following outburst from Meunier at his discovery: “To fall into your hands, Melville! You, the only man I feared, and whose description was engraved on my mind!”

In 1903, Melville surprised newspaper readers and crime fans by announcing his retirement. In truth, he had been recruited by the War Office for the new intelligence gathering agencies which would become MI5 and MI6. Melville was given the alias William Morgan and came to be known as ‘M’. It’s been speculated that this was the inspiration for the James Bond spymaster, and although Melville became more elusive to the public at this point in his career, he made a lasting impression on popular culture.

The pivotal event in Joseph Conrad’s 1907 novel The Secret Agent is based upon Melville’s discovery and identification of an anarchist bomber whose device had exploded prematurely in Greenwich Park. Melville’s endorsements can be found on the posters of Houdini, who taught him to pick locks. During his Secret Service days he sabotaged oil deals between the Persians and the French, and monitored and broke up a German spy ring in 1914 in an incident redolent of Erskine Childers’ 1903 novel The Riddle of the Sands.

Melville died in 1918. His is a fascinating legacy, his career coinciding with the politicisation of the British police force and its movement towards international espionage. In many of the events of his life, art seemed to imitate life or vice versa. Melville, spymaster extraordinaire, created the blueprint for the popular culture spy we know today.

This Extraordinary Emigrants article was written by Jessica Traynor, deputy museum director of EPIC The Irish Emigration Museum  in Dublin’s Docklands, an interactive museum that tells the story of how the Irish shaped and influenced the world.