The Irish soldier worshipped as an Indian god

Feared and adored, John Nicholson became a hero of the British Empire, and inspired a cult 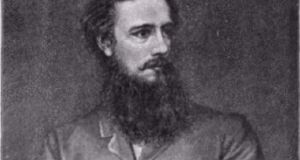 At 6’2” and with a long, black beard, John Nicholson was a tall, imposing figure, fierce and fearless. Photograph: Project Gutenberg/Wikimedia Commons

In 1857, a member of an Indian cult killed himself when he heard that the man he worshipped as a god had departed this life. The Nikal Seynis cult had first appeared in the 1840s. They wore garments the colour of faded leaves and followed Nikal Seyn wherever he travelled in a remote part of what is now Pakistan. Nikal Seyn was, in fact, an Irish soldier called John Nicholson. Even more remarkably, the cult lived on into the 21st century.

John Nicholson responded to the adulation by having his followers whipped. His family were hardly more likely to have approved of the cult, as they were devout Christians.

John was born in Dublin in 1822 to Alexander and Clara Nicholson. Alexander was a doctor in one of the city’s hospitals and, while John was still a boy, he contracted a disease from one of his patients and died. Clara’s wider family was in Lisburn in Co Antrim, and she headed north with her children as she looked for help from her relatives.

One of them, her brother, James Weir Hogg, had made a fortune in India. He paid for John to attend the Royal School Dungannon, and secured him a cadetship in the Indian Army. Over the next two decades in Asia, John Nicholson would not only earn the adulation of his religious followers, but become a hero of the British Empire.

Britain was expanding its territory in India at the time and Nicholson was given a remote area on the Afghan border to run as a “political”. This meant he was a policeman, judge, tax collector and diplomat rolled into one. Still in his 20s, he was expected to deal with hill tribes who resented any interference with their ancient way of life.

But Nicholson’s very presence made a deep impression on those around him. At 6’2” and with a long, black beard he was a tall, imposing figure, fierce and fearless. On one occasion, after the offer of a reward had failed to lead to the capture of a notorious bandit, Nicholson saddled his horse and headed off to hunt him down. He found him in his own village, surrounded by family and supporters. Undeterred, Nicholson fought with him, killed him and took his body back into town. He cut off the head and displayed it on his office desk as a warning to others.

When Indian troops mutinied in 1857, Nicholson led the British response in the Punjab. But his methods of dealing with civilians unsettled even some of his contemporaries. Men would be paraded before him and he would use his own intuition to decide who were enemy soldiers in disguise and who were innocent, who should die and who should live. Nor did he shrink from enforcing the perceived superiority of the European. He issued an order that no Indian was to ride by any white man. He was to dismount and salaam, bending his body in an act of subservience.

But his effectiveness as a soldier cannot be doubted, and when the time came to attack Delhi, which had been occupied by rebels during what the Indians call their First War of Independence, it was Nicholson who was chosen to lead the assault. After successfully entering the city, he was shot and fatally wounded. He was buried under a slab of plain granite in a cemetery that now bears his name in Delhi.

By the time of his death, John Nicholson had become a hero to the British. His death was described as a national misfortune. His mother paid for a monument to be installed at Lisburn Cathedral. The artist was John Henry Foley, the man who immortalised Daniel O’Connell in Dublin and Prince Albert in his London Memorial. It can be seen on the wall of the cathedral still.

The statue of Nicholson in Lisburn’s Market Square was erected in 1922 on the centenary of his birth, but it was a divisive occasion. Those speaking at the grand unveiling - in the year the Irish Free State came into being - used him as a symbol of the defence of Empire in Ireland as well as India.

As for the Nikal Seynis, the cult lived on long after Nicholson’s own death. Nikal Seyn assumed the status of a Muslim saint. Stories were told of him dispensing rough justice on those who terrorised the poor. According to legend, he once mistakenly chopped off a man’s head, but, realising his mistake, stuck it back on again.

Remarkably, the last of the Nikal Seynis died only in 2004 in the Pakistani town of Abbottabad, the last link with the life of a remarkable Irishman 150 years after his death.

Stuart Flinders is a BBC journalist and presenter, and the author of Cult of a Dark Hero: Nicholson of Delhi, published this month by I.B. Tauris. amazon.co.uk/Cult-Dark-Hero-Stuart-Flinders/dp/1788312368