Galway International Arts Festival: However crude the satire, nothing can compete with reality in 2019 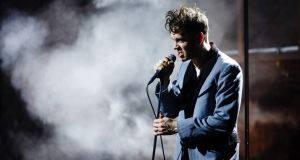 Dead Dog in a Suitcase (and other love songs) runs until Saturday. Photograph: Steve Tanner

DEAD DOG IN A SUITCASE (AND OTHER LOVE SONGS)

“Who’d shoot a dog?” somebody wails early in Kneehigh’s splenetic and spirited adaptation of The Beggar’s Opera. “Who, I ask you?”

Good question. Worse still, what kind of monster would shoot a puppet of a dog, so bounding and adorable not even a lamppost could resent it?

If you know John Gay’s 18th Century satire, or Bertolt Brecht’s sardonic 1928 update, The Threepenny Opera, you already know the answer. Step forward Macheath (Dominic Marsh), in the rakish costume of a 1950s teddy boy, and, in Carl Grose’s enjoyably acrid new version, the profession of a hitman. That he assassinates the last whistle-blower in town, Mayor Goodman, is a cause for some concern. That he kills the dog is an outrage.

When Cornwall’s Kneehigh visited Galway in 2017, not long after the Brexit vote, with Tristan & Yseult, its playful approach to musical and physical theatre helped to realise a tragedy as a comedy. Now, with a racist showman in the White House and a xenophobic buffoon heading to Number 10, this revival does the opposite, amplifying the howl, keeping beauty to a minimum. However crude the satire, director Mike Shepherd realises, nothing can compete with the real thing.

If that makes the syrup seems sour, Grose places his gritty entertainment in a grand, coarse tradition, where an end-of-the-pier Punch and Judy show serves as an acerbic chorus: “That’s the way to do it!” Likewise, the musical references of Charles Hazlewood’s live score – from smoky jazz to leaping ska to screeching punk – follow the beat of social unrest through British history. It makes for an abrasive, ragged comic opera, composed entirely in blue notes.

If anger is an energy, as Johnny Rotten once put it, the action pummels along on Michael Vale’s skeletal set, a corroded fairground of platforms, poles and slides. Here Mac, the professional cynic, overlaps romances between Polly Peachum (Angela Hardie, initially pure as snow, but drifting later towards PJ Harvey), daughter of corrupt industrialists, and Lucy (Beverly Rudd), daughter of the corrupt police chief, Lucy (Beverly Rudd). Several suitcases, one containing the dog’s remains, another containing a fortune in cash, get confused in similarly brisk circulation. Honesty is just as easy to mislay in such a spinning, sordid world.

That’s one of the reasons Georgia Frost shines as Filch, a hoodlum with a heart of gold, an even stronger voice, and amusingly brittle bones. And though “black hearts” and “rigged games” become memorable refrains, while no love ballad is more sincere than the ensemble’s torch song to money (“I love you when you’re with me/ I hate you when you’re gone”), the show’s philosophy belongs to as the mayor’s unbowed widow.

“You can’t blame the world,” the excellent Lucy Rivers  tells Macheath from an adjoining cell. “We make the world.” Ain’t that the truth? Gay and Brecht’s morality tales knew as much, but still plumped for absurdly happy endings. What does it say that Kneehigh will not, preferring an immolating thrill of sound and fury? We’ve made our choices, says the crescendo. Our bags are packed.