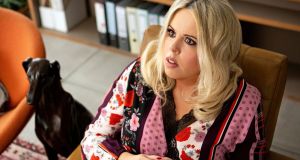 The flailing adventures of a struggling actor continue

It probably shouldn’t be a surprise that Roisin Conaty has now found a bigger audience for her bad behaviour. Moving from E4 to Channel 4, the second series of her comedy GameFace (Channel 4, Wednesday, 10pm) continues the flailing adventures of a struggling actor, spinning from the break-up of her long-term relationship (and his instant marriage to her doppelgänger) into an eccentric house-share, a crush on her gentle driving instructor, and the entanglements of her complicated family.

What is surprising is that her therapy should have found a bigger audience too. “I don’t want to waste the good stuff,” her counsellor shushes Marcella until a trainee arrives.

The student, it turns out, is already a big fan: “How does someone stay in that spirit,” she marvels at Marcella, apparently a celebrity of dysfunction, “when time after time life just lets her down?”

Actually, Marcella has cause for cheer: she has passed her driving test that morning (“What? What are you not saying?” her shrink needles, excitedly.) Well, she also instantly lied about failing it to keep up sessions with Jon, her tastefully hirsute, otherwise transcendentally blank Irish instructor. What kind of a person lies so effortlessly to get what they want, marvel her psychological examiners? A psychopath?

Well, that’s one answer, but Conaty keeps poking, knowingly, at another: that she is the heroine of a sitcom. It isn’t that Marcella is bad, it’s that her life has become a bad joke.

GameFace is funniest in its flashbacks, self-contained gags that come with cartoon-swift set-ups and espresso-shot punchlines. Take one of Marcella’s previous fibs, picking up a tattoo-enthusiast by suggesting she herself has some permanent art in a particularly intimate place.

The next beat involves the quick self-administering of blue sharpie pen. In the next, she tries to avoid kissing his smeared-blue face.

Talk about the luck of the draw.

But, like Marcella’s immediate swings from chicanery to come-uppance, the most distinctive thing about GameFace is its pace. So, in one styptic blink, her driving test lie can be rationalised as a prank, until she finds herself tangled up in Jon’s scrupulousness, her ex’s emotional breakdown (now living with Marcella’s mother, played by Pauline McLynn) and finally his new wife’s paranoid vendetta.

That’s a lot of complication to pin on a series premiere. Or, as her growing number of therapists and watchers would have it, we don’t want to waste the good stuff.